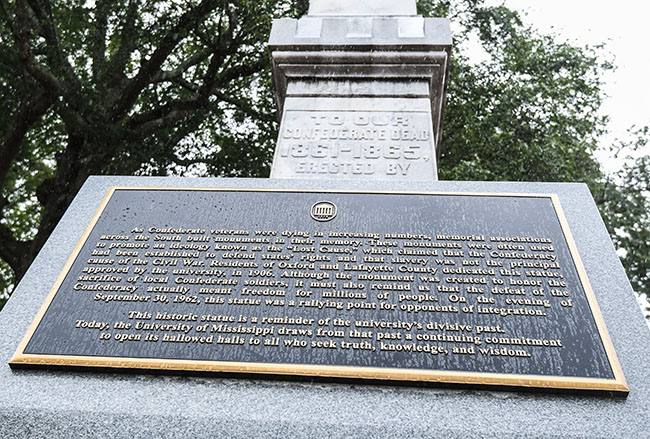 A "contextualization plaque" is located in front of the Confederate statue at the University of Mississippi, in Oxford, Miss. on Wednesday, September 5, 2018. An effort of the Sons of Confederate Veterans to block a university diversity plan, which includes the contextualizing of Confederate monuments, streets and campus buildings, has been rejected by the Court of Appeals.

The University of Mississippi is within its rights to contextualize Confederate monuments, streets and campus buildings as part of its diversity plan, according to a ruling from the state Court of Appeals.

The Mississippi Division of the United Sons of Confederate Veterans filed its original petition on Sept. 18, 2014, in the Lafayette County Chancery Court, requesting an injunction against the University of Mississippi, in response to UM’s diversity plan that set out to move, rename or contextualize confederate monuments, street names and building names on its Oxford campus. According to court documents, the petition requested that UM be prevented from altering, desecrating, attacking, removing or renaming any of the confederate monuments or insignia on campus.

The case lay dormant for two years before the chancery court entered an order removing the case from its trial docket and dismissing it without prejudice on April 29, 2016. On May 9, 2016, SCV filed an amended petition for injunction and other relief. By that time, UM had begun moving forward with its diversity plan and had renamed Confederate Drive. It had also placed a placard near a confederate monument on campus to contextualize its presence. In its amended petition, SCV requested that those actions be reversed, in addition to requesting that no further changes be made.

On March 22, 2017, Lafayette County Circuit Court Judge J. Kelly Luther ruled in favor of the University. SCV appealed the ruling, which was affirmed this past Tuesday.

The University unveiled six contextualization plaques at various locations on campus on March 2, 2018. At the time, UM Chancellor Jeffrey Vitter said the plaques were a product of a deliberate, thoughtful and focused academic endeavor.

“It’s not always easy to recognize the significant moments when we’re in the midst of them. It can be challenging to tell the story of change and transformation while we are going through it,” Vitter said at the March 2 ceremony. “But we are here today to recognize that this work indeed is a significant moment of change and transformation in the life of our university, and we’re here to honor this moment by sharing our story broadly and in a forthright manner through the six contextualization plaques we’re unveiling today.”

Judge Tyree Irving presided over the Court of Appeals proceedings, wrote that the court found SCV’s members have “no private right that entitles them to require that UM refrain from implementing its diversity plan,” and that the issue is without merit.

Other contextualization projects include individual gravestones at the University Cemetery and a related memorial, a marker in an appropriate location to recognize the African-American men from Lafayette County, who served in the Civil War, plans to clarify that Johnson Commons is named after Paul B. Johnson, Sr. by adding the designation to the building’s signage and plans to rename Vardaman Hall once renovations are complete.

Dr. John Neff, associate professor of history and director of the Center for Civil War Research, also spoke during the March 2 ceremony about the impact of the University’s contextualization efforts.

“We acknowledge our indebtedness to enslaved laborers who built our university. We present narratives of the lives of men who influenced the direction of decisions made throughout our history,” Neff said. “By contextualizing these important aspects of our campus, we emphasize the distance we have traveled between our time and theirs.”

The SCV has the option to appeal the Court of Appeals decision to the Mississippi Supreme Court.

Oxford author David Sansing discusses “The Other Mississippi” in…