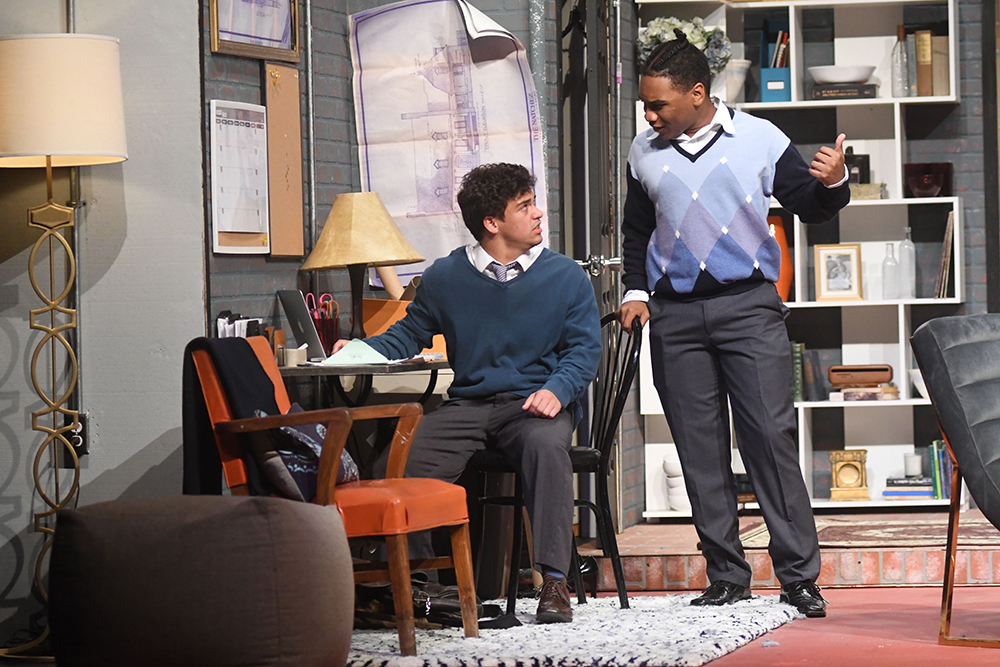 The Oxford High School theatre program opens its 2018-2019 season tonight with a farce.

The group will present “The Nerd,” a comedy that chronicles the relationship between a young architect and the man who saves his life while both are serving in the U.S. Army.

“He’s never met (the man who saved his life,) so he doesn’t know him. They’ve been in contact through email and such, but they’ve never met,” OHS Theatre director John Davenport said. “And this story starts with the news that this person is coming to visit.”

The friend, Davenport said, turns out to be a very “unwanted” house guest who is very crass and immediately unwelcome. Willum Cubbert, the architect, and other characters spend the duration of the play attempting to get Cubbert’s friend to leave.

“This is a domestic comedy that is very farcical and almost feels like a Saturday Night Live skit,” Davenport said.

Cubbert is played by senior David Torrent who characterizes the architect as “just an average guy.”

“At the beginning, Willum is letting a lot of things hold him back that he probably shouldn’t,” Torrent said, “Eventually, with some help from his friend he turns it around and realizes where he needs to go and what he needs to do.”

Like all OHS theatre productions, the show features set, lighting and sound design by a group of Davenport’s students.

“We have a class of about 30 students that we bring over (to Oxford Middle School) every day,” Davenport said. “These kids are the backbone of the entire season.”

One such student is senior Noël Torma who is serving as both a student director and the head of props for “The Nerd.”

As student director, Torma was given the opportunity to direct a scene within “The Nerd,” which she said was quite a challenge.

“It was honestly a terrifying experience,” Torma said. “Trying to block an actual scene and then trying to see in a big picture view in what can be changed with staging and how lines are delivered, it’s really hard to focus on the big picture. As an actor, I’m used to focusing on my part and my lines, not on the whole piece of work….but it’s been so much fun.”

Fun is something that Davenport hopes the audience experiences when they come to the show.

“I hope it gives them an evening that they will continue to talk about because it is so ridiculous and so funny. I hope they will enjoy being taken out of anything else going on and just be in the moment here laughing with us. But I also hope it gets everyone excited about what else we have coming this season. I hope this show will set our standard for the season,” Davenport said.

Performances of the“The Nerd” are Sept. 11, 12 and 13 at 7:30 p.m. at the Kayla Mize Auditorium on the Oxford Middle School campus. Tickets at $10 per person and can be purchased at the door or by visiting https://www.oxfordsd.org/theatre.