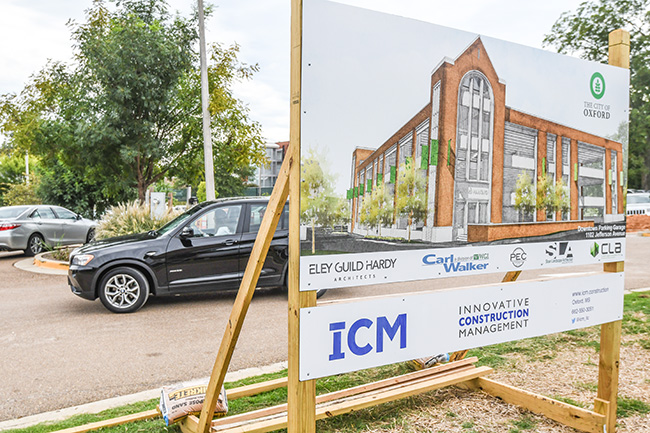 Cars use the parking lot where the new parking garage is to be located, in Oxford, Miss. on Tuesday, September 11, 2018. The Board of Aldermen voted during a special meeting on Tuesday to withdraw acceptance of a contractor’s bid due to failure to secure a performance bond.

The Oxford Parking Garage project has hit another roadblock after the Board of Aldermen voted during a special meeting on Tuesday to withdraw acceptance of a contractor’s bid due to failure to secure a performance bond.

Holly Springs-based Shaw Services, the contractor in question, was unable to secure a performance bond for its $3.4 million bid, according to Bart Robinson, city engineer and public works director. Performance bonds for projects of this nature are required by both the City and by state statute, as they protect the City from being held liable if, for example, a contractor cannot pay its subcontractors.

“(Shaw) was hired for the dirt work, the foundation, the slabs on each floor, the surface parking lot of it,” Robinson said. “Theirs was the lion’s share of the project.”

The company had also preemptively installed fencing around the perimeter of the parking lot behind Oxford Square North after the lot closed for construction on Aug. 26. The lot was reopened “for the foreseeable future” after a special meeting of the Oxford Parking Commission on Sept. 7. Now that the City withdrew its bid, Mayor Robyn Tannehill stated the fencing will be taken down by Wednesday afternoon.

“After much discussion about all the moving parts… after analyzing lots of different legal issues, the board has got a plan for moving forward,” Tannehill said.

In terms of next steps for the City, the aldermen voted to demand payment of 5 percent of Shaw’s bid bond, totaling approximately $170,000. Because Shaw was able to secure a bid bond, Robinson said, the City didn’t have reason to be suspicious of Shaw’s inability to secure a performance bond.

“Typically the companies that issue bid bonds are also the companies that issue performance and payment bonds, so there was no reason for us to think he couldn’t get a performance and payment bond, because he had a bid bond in place,” Robinson said. “Because his bid is in default, because he did not go forward with our contracts the way they were written and the way they were issued, we’re going to demand (a portion) of that bid bond.”

The aldermen also voted to reopen bids for the project, which Robinson said could happen as soon as Oct. 9. By statute, the City has to advertise for two consecutive weeks. After the second advertisement, 15 business days have to pass before bids may be opened. It’s to the board of aldermen’s discretion whether a special meeting will be called or whether the matter will be discussed during their Oct. 16 regular meeting.

As to why the City cannot simply offer the project to the second-lowest bid from the original bidding process, Robinson said it’s a matter that is out of the City’s hands.

“It’s a public bid. The Supreme Court issued an opinion back in the middle of August that prohibited us from (accepting the next-lowest original bidder), because of the difference in the bid price versus what we had allocated for the project,” he said. “That ruling makes it tough, but that’s just part of the new law of the land.”

Should matters move as quickly as possible, Oxonians could see construction beginning by Nov. 1. However, Robinson said that’s not exactly likely, as the board also has to consider the fact that the parking garage is a 12-month project and the fact that it is football season.

“We’re going to do everything to make sure it’s open by next football season,” Robinson said. “I think it’s realistic that we could very easily see construction start as early as Nov. 1. But, realistically, because it’ll be right at the end of football season, I suspect the board will wait until at least the week of the Mississippi State game to start construction.”

Robinson added that there’s still a chance the garage will not be complete by the first couple Ole Miss home games in 2019.

In the meantime, Robinson said, the City will be working with the nine other contractors hired for the project to manage the implications this setback will have on their portions of the project.

“We are going to reach out to the other contractors as soon as we can to verify that they will hold their prices, that there’s as little liability on the City as possible through extending or delaying the beginning of their performance periods,” Robinson said.

In the meantime, the future parking garage lot is open, as are the other free lots opened by the City in preparation for construction.