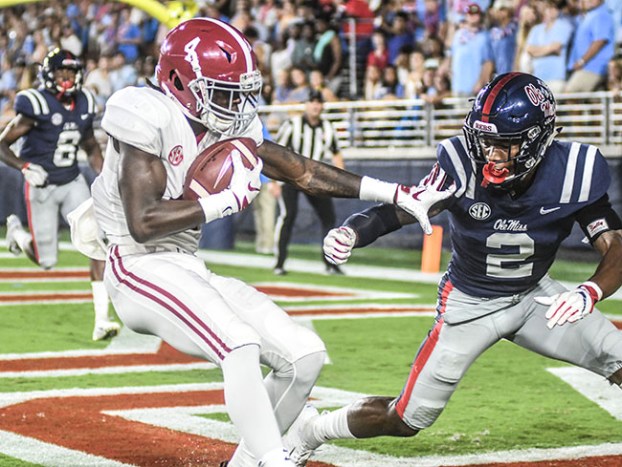 For 11 seconds Ole Miss was in complete control. The next 59 minutes, 49 seconds belonged to the No. 1 team in the country.

The Rebels jumped out to a quick lead on the first play of the game with a 75-yard touchdown reception by D.K. Metcalf. It was the only positive play for the Ole Miss (2-1, 0-1 SEC) offense all night, which was held to 248 yards of total offense.

The story once again was the inability of the defense to put up any kind of pressure on Alabama (3-0, 1-0), who tallied 516 total yards of offense. Seven of Alabama’s first half possessions resulted in touchdowns. The other two ended with a fumble and a missed field goal.

Jordan Ta’amu threw for 133 yards and one touchdown. He had three turnovers with a fumble after a run in the second quarter and threw two interceptions. Xavier McKinney returned an interception 30-yards for a pick six in the third quarter.

The impressive run game Ole Miss had been able to establish the first two weeks of the season was non-existent on Saturday. The Rebels got just over the century mark, finishing with 115 yards. Scottie Phillips got his first taste against an SEC defense resulted in him having 44 yards on 12 carries and zero touchdowns.

After picking up a quick 75 yards on the first play, Metcalf had only one other catch the rest of the night. He finished with a team-high 92 yards and one touchdown. A.J. Brown had four catches, totaling 34 yards and DaMarkus Lodge had one catch for 7 yards.

The Rebels conclude their three-game home stand with Kent State next Saturday at 11 a.m.

Ole Miss begins their Southeastern Conference slate on Saturday when they host No. 1 Alabama at Vaught-Hemingway Stadium (6 p.m.;... read more