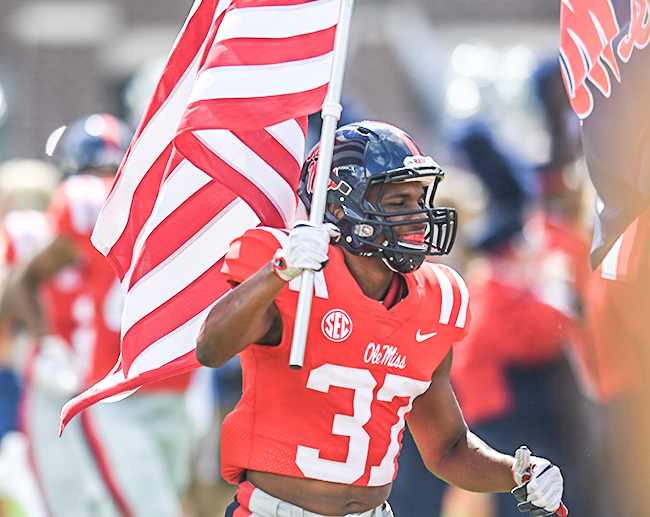 Ole Miss begins their Southeastern Conference slate on Saturday when they host No. 1 Alabama at Vaught-Hemingway Stadium (6 p.m.; ESPN).

Ole Miss (2-0) comes in after defeating Southern Illinois in their home opener, 76-41. It was not an inspiring victory for the Rebels with the defense giving up 38 points and five touchdowns in the first half. With No. 1 Alabama in town, Ole Miss can not afford another flat first half.

After missing last week due to a concussion, linebacker Kevontae’ Ruggs returns to the lineup to provide a boost for the defense. Wide receiver DaMarkus Lodge also returns from concussion protocol.

Alabama thought they had a touchdown with a 7-yard catch from DeVonta Smith but was ruled incomplete. The Rebel defense holds the Tide to a 20-yard field goal. Alabama 52, Ole Miss 7 11:49 3Q.

Ole Miss goes three and out. Alabama puts Jalen Hurts in at quarterback and he produces a touchdown. Hurts hits Juedy for a 22-yard pass. Alabama 42, Ole Miss 7 4:36 2Q.

Ole Miss gets to the Alabama 38 but three straight penalties back them up and they must punt. Alabama 28, Ole Miss 7 :56 1Q.

Things are going south for the Rebels in a hurry. Jordan’s pass is intercepted on first play of the game. Deionte Thompson returns it 41 yards to the Rebels’ 15.

Rebels were moving the ball and inside Alabama territory before Ta’amu is hit on a keeper and fumbles the ball. Alabama’s Phidarian Mathis recovered.

Ole Miss is unable to cash in on the short field and punts the ball away for the second time. Ole Miss 7, Alabama 7 10:50 1Q.

The Rebels were the first to punt after a three-and-out. Alabama then fumbles the ball away on their third play of the drive when Henry Ruggs III dropped the ball and C.J. Moore recovered.

Alabama responds in three plays. Running back Damien Harris scores on a 43-yard run and was untouched. The defense was severely lacking that drive. Ole Miss 7, No. 1 Alabama 7 13:39 1Q.

Ole Miss won the toss and received the football. It took one play for the Rebels to take the lead. Jordan Ta’amu hits D.K. Metcalf for a 75-yard touchdown pass. Play was reviewed and upheld. Ole Miss 7, No. 1 Alabama 0 14:49 1Q.