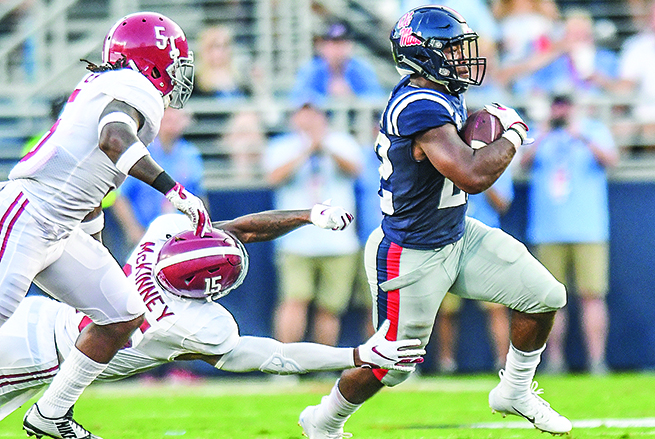 If there is a reason for the way the Ole Miss offense performed against No. 1 Alabama it could be placed on the shoulders of the preparation the week leading up to the game. One of the nation’s top offenses was held to one touchdowns and less than 250 yards on Saturday.

The touchdown came on the first play of the game, a 75-yard reception by D.K. Metcalf.

On Monday, offensive coordinator Phil Longo put the blame on how his offense approached practices last week and Metcalf echoed his sentiment.

“(We lacked) focus on both sides of the ball,” Metcalf said. “We kind of took them lightly watching them on film like they couldn’t guard us on defense. We kind of overlooked that secondary a little bit, and Alabama had a pretty good secondary.”

In their first two games, Ole Miss (2-1) averaged over 550 yards per game and scored 16 touchdowns.

Even after being held to less than 50 percent of the first two games’ production by Alabama’s defense there is still not concern on the offensive side of the ball about wanting to adjust anything. Not yet.

“We underachieved in everything on Saturday,” Longo said. “In retrospect I think we could’ve done more to prepare. I think the Xs and Os were fine. We re-evaluated our game plan and we’re happy with our plan. Our preparation going into the Alabama game we all believe could’ve been better and that falls on me. So, we’ll get that taken care of and we’ll be more prepared for the next game.”

The Rebels have the opportunity to get back on track this Saturday against Kent State (1-2). The Golden Flashes are ranked 108th in the nation in total defense, giving up 460.7 yards per game.

They have also allowed opposing offenses to score 15 touchdowns.