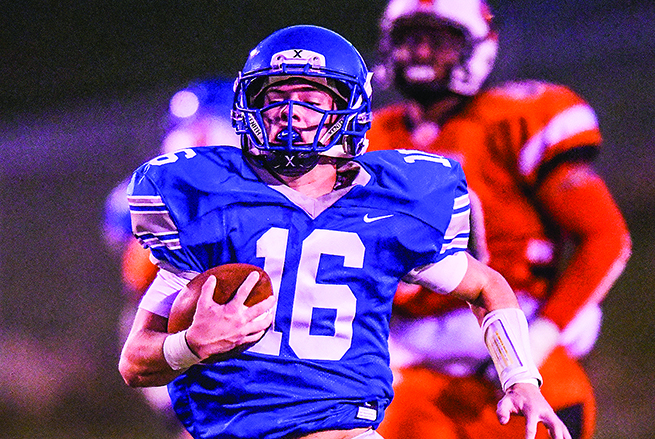 After their 5-0 start, Water Valley has earned a lot of talk about how good their season could actually become. The Blue Devils could solidify themselves as a true contender in Class 3A if they can get past one final test before Region 2-3A play begins next week.

The Blue Devils cleared their first hurdle last week, facing adversity for the first time and defeating Calhoun City, 14-13. The game provided the first stressful moments of the season, but the Blue Devils managed to keep their record unblemished for another week.

“Our message (after the game) was ‘We did well. We beat a good team and always try to make your better best,” Water Valley head coach Brad Embry said. “That’s a process that doesn’t happen in a day. It happens over multiple days throughout the year. We had to get better (Monday). There’s a sign on the fence that leads to the field that says ‘get better today.’ We looked at film and pointed out some specific things we could get better at.”

This Winona team is unlike previous teams Water Valley has faced. The Tigers moved up to 3A this year after consolidating with Montgomery County High School this summer. The merger pushed them out of Class 2A and into Region 5-3A.

The Tigers went 11-4 in 2A a season ago on their way to the MHSAA Class 2A state championship game at Vaught-Hemginway Stadium last December. They fell to Taylorsville but have carried over their winning ways to their new home.

Winona currently has a two-game winning streak over the Blue Devils, beating them 35-19 at home last season.

“A lot of the same,” Embry said when asked what he sees in Winona’s new team makeup. “Their quarterback is different, but he’s really good. He’s a good, big athlete. They have similar schemes that they had last year. …a lot of those kids are back. They had a large group of juniors and all those kids are seniors now. So, it’s a lot of the same kids who went to the state championship in 2A. Those guys do a great job and it’s going to be a big test for us. We understand that.”

The Tigers are without quarterback JaTyler Moore who graduated last year. Moore threw for over 2,000 yards and 28 touchdowns in 2017. In his place is junior An’Darius Coffey who backed up Moore last season. In five games, Coffey has thrown for 587 yards and five touchdowns along with one interception.

The run game looks different from last season, too. DJ Ringo led the Tigers last season with 1,070 rushing yards as a junior but is not listed on this year’s roster. Leading the running attack this year is Coffey with 432 yards and six touchdowns. He has two games of 100 yards or more.