No. 4 West Point holds off Lafayette in Region 1-5A opener 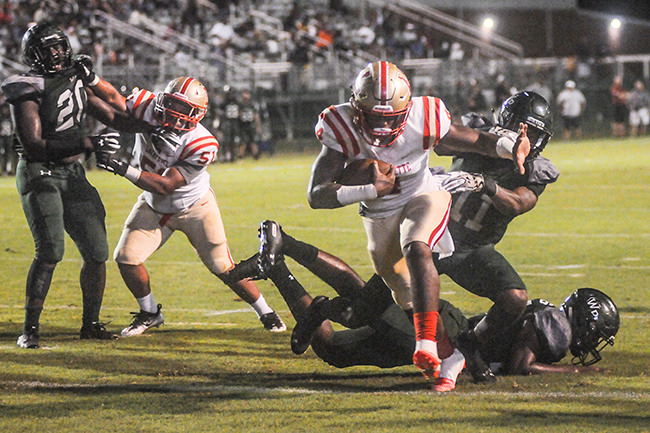 WEST POINT — Heading into Friday night’s contest much of the discussion was on Lafayette and No. 4 West Point’s offenses. For two quarters that discussion was warranted until the defenses decided they wanted their time to shine.

The two-time defending MHSAA Class 5A champion West Point defeated Lafayette 14-13 at Hamblin Stadium in both team’s Region 1-5A opener.

In what started as a track meet finished anything but, with a battle in the trenches taking over the second half.

“One play and one point short,” Lafayette head coach Michael Fair said. “We’ve been in a tough spot here lately and were climbing out of a hole. I think we made strides tonight and at times I thought we played well enough to win. It just didn’t work out.”

West Point (4-1, 1-0 1-5A) got the scoring started on the opening drive. Running back Jimothy Mays capped it with a five-yard run to put the Green Wave up early. Their only other score of the night was a one-yard run by Brandon Harris midway through the second quarter to put West Point up 14-6 at the time.

The story of the first two quarters for Lafayette (3-2, 0-1) was the inability to hold onto the ball. On their first possession of the game, the Commodores got inside West Point’s 15 yard-line but running back Jamie Shaw fumbled it and the Green Wave recovered at their one yard-line. Lafayette fumbled the ball five times in the first half with the Green Wave recovering two of them.

On the first play of the second quarter, Shaw scored from three yards out but a blocked extra point attempt ended up being the biggest play of the game for West Point. Lafayette’s second score was a little more unorthodox. Running back Lance Stewart fumbled but the ball bounced forward into the end zone with offensive lineman Levi Lott recovering with 5:45 left in the half.

That would be the final scoring play of the night.

“We came off the ball and stayed true to ourselves at the beginning of the game,” Fair said. “In the second half we kind of gave up a little intensity on the offensive front. Our backs were still running hard, but you’ve got to give some credit to (West Point). They made adjustment on the defensive side of the ball.”

After not punting in the first half, Lafayette punted on four of their five second-half possessions. Their final possession ended in a turnover on downs after quarterback Randy Anderson was sacked with less than a minute to play.

Lafayette’s defense also turned up their intensity, keeping West Point off the board and forcing them to punt on every possession but their last in the second half.

“We bowed up second half,” Fair said. “I’m just so proud of, not only our kids, but our coaching staff. We had to do some big time adjustments in the second half. I think what you saw was two defenses saying ‘that was enough.’ I felt like ours said it and I’m proud of our defense right now.”