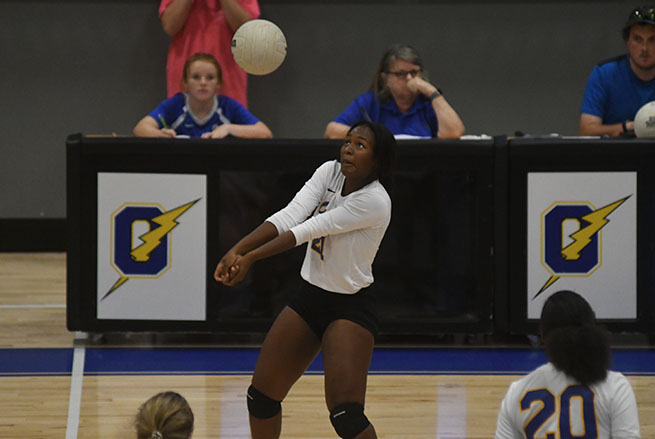 The two teams had already met previously this season with Tupelo sweeping the Chargers 3-0 last month. The start of Thursday’s match had the same feel. The first two sets were evenly matched before Oxford started to struggle.

“The first set, honestly, we should have won,” Oxford head coach Kacie Hengler said. “We missed so many serves and even in the second game we missed a ton of serves. We gave them massive points in the beginning of that game. That was really frustrating to watch.”

With the match knotted at 1-all and Oxford gaining momentum after their second set win, the wheels began to come off. Tupelo (11-10, 3-0) jumped out to large leads in both the third and fourth sets.

The Chargers were unable to crawl out of a large deficit in the third set, but after falling behind 11-1 in the fourth set they used a 14-5 run to get to within one of the Golden Wave. Unfortunately for Oxford, Tupelo answered with a 9-3 run of their own to close out the set and the match.

“We just couldn’t adjust,” Hengler said. “Our defense was falling down instead of staying on their feet and running to the ball. There was panic. I think our libero struggled a little bit tonight and that really hurt us. It was just tough all the way around.”

Katy Calderwood had six kills and freshman Ainsley Tacke had four kills and a dig.

Tacke started due to junior Shanea Wadley being injured in a car accident last week.

“We had a freshman in there tonight who normally doesn’t take on the role she did tonight,” Hengler said. “She did well tonight. …I feel like we did a lot of things well and it’s hard to have a loss like that and you have a couple players out there who are doing a great and their work doesn’t show for it.”

Next up for the Chargers is a trip to Jonesboro, Ark. for a tournament on Saturday. Oxford will face Trumman, West Memphis and Valley View out of Arkansas in pool play. Valley View is currently 10-0 in their conference and 17-1 overall.

“I’m really excited about that tournament,” Hengler said. “We haven’t had a history of doing well in tournaments. I’m just excited to play other teams. We see the same teams in other tournaments all the time so it will be nice to see something new.”