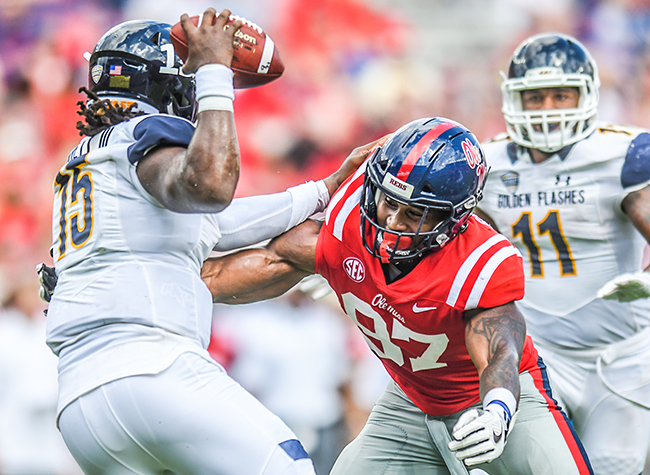 For the first time this season the Ole Miss defense showed an aggression against Kent State that had been lacking.

Entering last Saturday’s game, the Rebels were dead last in the Southeastern Conference and one of the worst in the nation in total defense, giving up 543 yards per game. Against Kent State, the defense held them to more than 150 yards less than their season average (390).

A game plan to make the defensive line become more aggressive and find their way into the opponents backfield more frequently than they had the previous three games saw success. Before Saturday the Rebel defense had two sacks, both coming against Southern Illinois. Against the Golden Flashes, they sacked quarterback Woody Barrett seven times.

“One thing we talked about was get off the ball more and lets re-establish the line of scrimmage,” Ole Miss defensive coordinator Wesley McGriff said. “(defensive line) coach (Freddie) Roach did a good job of drilling the guys, putting them in that situation. It was good to see those guys ready to play. They responded and it paid huge dividends.”

As a team, Ole Miss finished with 15 tackles resulting in a loss of 76 yards.

“The biggest thing that both Markel Winters and Charles Wiley brought to the table on Saturday was their play speed,” McGriff said. “I thought they both did a really, really good job of getting off the ball and re-establishing the line of scrimmage. Doing the one thing we talk about up front is, ‘lets go play in enemy territory and lets try and get the offense off schedule on the early downs.’”

Winters’ play on Saturday helped him earn a start at defensive end for this week’s game against No. 5 LSU, pushing Tariquious Tisdale to the No. 2 slot.