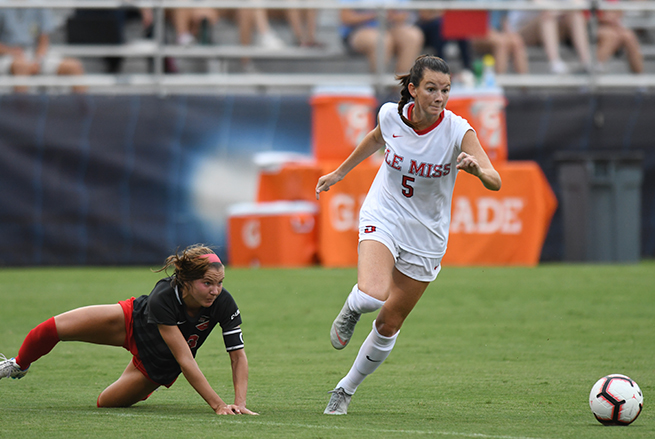 When CeCe Kizer scored her second goal of the afternoon in Auburn on Sunday a weight was lifted off her shoulders.

Not only did she help Ole Miss earn their first victory over a Top-10 opponent in nine years, she also etched her name into the program’s record book. Kizer scored her 46th career goal, setting a new program record and passing former record-holder Rafael Souza.

It was the culmination of a journey that started out much different than it ended.

Kizer was not supposed to be an offensive weapon for the Rebels. When being recruited out of Blue Valley Northwest High School in Overland Park, Kan., Kizer was playing defense and the Rebels were looking at her to play middle fullback.

“Did I expect (Kizer) to be this prolific? No,” Ole Miss head coach Matt Mott said. “When she got here we had two senior center backs, so she wasn’t going to get on the field. When we watched her play and attack some we thought she was doing a good job. We had a hole at attacking mid (fielder) so we put here in there in preseason and she did pretty well. When we started the season she started firing them in and she hasn’t moved since.”

Instead, Kizer shifted to midfield during her high school career and finished with 63 goals.

When Kizer arrived in Oxford the summer before her freshman season she liked the how the offense worked under Mott and something clicked.
From there, she became a key offensive threat.

The results of moving to offense did not take long to reveal themselves. Kizer was named the Southeastern Conference’s Freshman of the Year in 2015, becoming the first Rebel to earn the distinction in 10 years. Her 14 goals were the most by a freshman nationally, and she was third in the conference and 18th nationally in total goals.

From there, the success kept coming.

“Right after I committed to (Ole Miss) I got moved back up top and started scoring a bunch of goals,” Kizer said. “Matt and I always joked about, ‘Well, maybe you’ll be an offensive player here.’… That summer when I first got here, when we played captains practices and stuff they had me playing up top, it just fit. I clicked with the offensive group.”

A foot injury limited Kizer to just five goals in her sophomore season. She followed it up with a 16-goal season for her junior campaign, putting Kizer at 35 career goals – 10 shy of breaking Souza’s mark.

Kizer knew the record was attainable heading into her final season and after a fast start, scoring six goals her first five matches, it seemed all but a formality that she would shatter it. As the matches kept coming so did the pressure she was putting on herself to reach the mark.

Following the Rebels’ match against Troy on Aug. 30, Kizer scored two goals in the next six matches.

“I always knew what the record was, but I never thought that I would come close to it,” Kizer said. “It’s always been in the back of my mind. It’s something that I’ve kind of always wanted to chase and make a statement here. I think the last couple games, and the fact that we weren’t winning, I think I kind of put that pressure on myself. Knowing that I’m the leader of the attack and we weren’t scoring goals. It was kind of hard.”

The night before their match with Auburn last weekend, Kizer had a talk with her dad that helped calm the nerves. With a renewed focus the following day, Kizer scored two goals in the second half and Ole Miss defeated No. 9 Auburn.

Now that history has been made, and with seven more regular season matches to be played, Kizer has removed the monkey from her back and is ready to just play soccer and help get the Rebels back to the NCAA Tournament in November.

That journey continues on Friday when the Rebels host No. 2 Texas A&M at the Ole Miss soccer complex at 7 p.m.