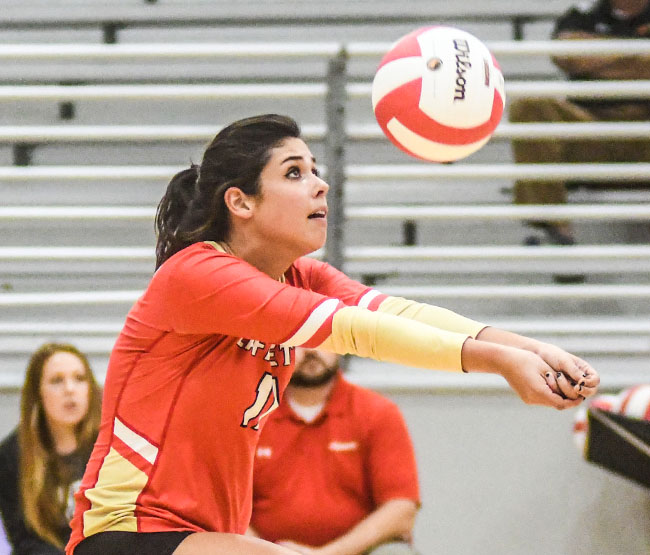 Lafayette had everything under control, staring at a chance to clinch another region title.

The Commodores were four points away from victory before Caledonia found their stride and rattled off three straight set wins.

“We had it and (Caledonia) did what they did, which is not make mistakes,” Lafayette head coach Clint Jordan said. “We let our foot off the gas a little bit and we tried to get back in it and we couldn’t get any kind of rhythm. Most of that is because of the way they serve. When they saw we were struggling they went after us.”

With the win, Caledonia clinched the season sweep over the Commodores. The Confederates also won the Aug. 30 match at Caledonia by same score as Thursday’s result.

With a region title on the line, Lafayette jumped out to a 2-0 lead after winning a marathon opening set followed by a win in second frame.

The tone of the match shifted when the Commodores led 21-20 in the third set and Caledonia finished on a 5-0 run to avoid a sweep. Lafayette could never recover from that moment, giving up the final two sets.

“If you’re not where you’re supposed to be (Caledonia) will take advantage of it, because they’re very good,” Jordan said. “They took it to us. …We’re all hurting because we should have put that away and we didn’t.”

Hidden behind the end result was the night senior Mariah Holland had for Lafayette.

Holland finished tied with team-high 12 kills along with 8 blocks. Freshman Kailey Gooch also finished with 12 kills and 17 digs. Sarah Rae Goolsby had a team-high 20 digs with Julianna Ingram right behind with 18.

“Mariah had a good game,” Jordan said. “We were trying to go to here a little more. For whatever reason we couldn’t get close enough to the net.”

Lafayette returns to action on Tuesday at crosstown rival Oxford for the final match of the season between the two schools.