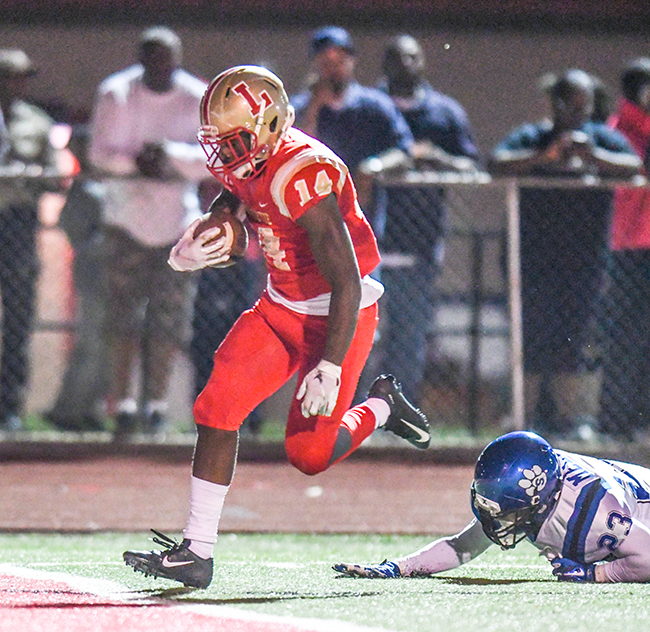 The Lafayette Commodores came home after a long road trip to take on Saltillo in front of a raucous crowd at William L. Buford Stadium. The Commodores had a full house for homecoming tonight.

Lafayette came into tonight having lost two straight games, that losing streak came to an end with an emphatic win over the Saltillo Tigers. The Commodores emphasized execution tonight offensively and it led to a 48-7 win.

“I thought we did a really good job with execution,” Lafayette head coach Michael Fair said. “They kind of showed us some heavy overload sets on offense and I just thought our kids really played really hard.”

The Saltillo defense came out and stacked the box in hopes of stopping Lafayette’s rushing attack, which allowed Commodore quarterback Randy Anderson to throw the ball with success tonight.

“I was pleased with how Randy threw the ball,” Fair said. “Our receivers did a really good job running routes and they caught the ball really well tonight to help Randy out.”

Lafayette returned home after being on the road for a month. The crowd showed out in a big way for the Commodores tonight on homecoming. According to Coach Fair, his players fed off of the home crowd.

“We hadn’t played at home in a month and it was really good to get back to our crowd and our student section,” Fair said. “I thought they were really great tonight, I thought it was a great overall atmosphere tonight and our kids fed off of it an played really hard.”

While Saltillo (1-6, 0-2) stacked the box, Lafayette still found a lot of success on the ground. Lance Stewart rushed for two touchdowns for the Commodores and Jamie Shaw also rushed for a score. Andrew Robinson scored his first career touchdown in the first half.

“I just thought the overall offensive execution was really great tonight,” Fair said. “I thought we were fundamentally sound and I really thought we did a tremendous job on special teams too.”

It will be a quick turnaround for Lafayette, who travels to Lewisburg for a rare Thursday night game due to Fall Break next weekend.