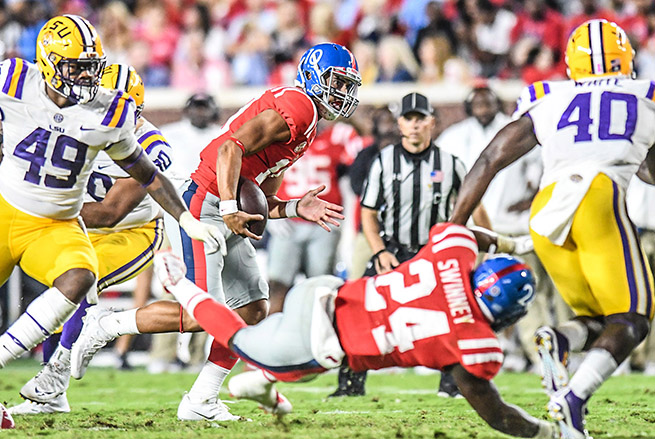 The interim coach tags are off for Ed Orgeron and Matt Luke.

Ole Miss quarterback Jordan Ta’amu is returning to the game where he took the reigns from last year’s starting QB, Shea Patterson.

The game is not short on storylines.

Last year, Orgeron returned to Oxford, where he spent three seasons as the Rebels’ head coach, and earned a 40-24 victory over the Rebels. The win was one of the jewels that saw Orgeron named head coach at the conclusion of LSU’s season.

Luke was also in the midst of his own audition season and trying to earn the job as Ole Miss’ head coach.

Luke, who also played in the Ole Miss-LSU rivalry when he suited up for the Rebels from 1995 to 1997, also has a connection to the game on a professional level, he worked on Orgeron’s staff at Ole Miss.

“Me being a young coach, I think there’s always something you can take (away). He had tremendous energy and I think his players are feeding off of that,” Luke said. “I was the recruiting coordinator under (Orgeron) and learned a lot from the recruiting standpoint.”

The Ta’amu era began on Oct. 21, 2017 against LSU. Patterson went down with a season-ending ACL injury and Ta’amu led the Rebels the final three-quarters of the game. His first two drives resulted in touchdowns.

That game was inside the friendly confines of Vaught-Hemingway Stadium. Ta’amu has played in hostile environments, including Alabama’s Bryant-Denny Stadium and last year’s Egg Bowl against Mississippi State, but this is his first time to play at Tiger Stadium.