Ole Miss’ Linton, Knight moving to defense due to injuries 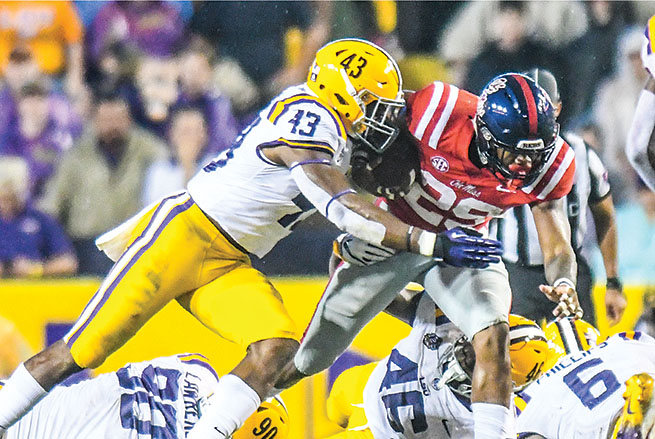 Ole Miss' Armani Linton (29) is tackled by LSU linebacker Ray Thornton (43) at Tiger Stadium in Baton Rouge, La. on Saturday, September 29, 2018. Linton is being moved back to defense due to injury.

A secondary that has run out of reserves is tapping into reserves from another position group, on the offensive side of the ball.

Running backs Armani Linton and Tylan Knight have been moved over to the secondary to help fill the holes left behind by Ole Miss’ rash of injuries through the first five weeks.

The latest came last weekend when C.J. Moore suffered what would later be diagnosed as a torn pectoral muscle and will be out at least 4-5 months to rehab the injury. Matt Luke and his staff are going to apply for a medical redshirt exemption for Moore but with that being the senior’s fifth game to play in this season it is unlikely it will be granted.

“(Armani) is a good athlete. He’s just got to be able to come down and tackle in the run game,” Ole Miss head coach Matt Luke said. “He was doing a good job at running back, but just with all the injuries we felt Armani and Tylan gives us a little shot in the arm. Armani can get people lined up back there. You’d be shocked how much retention he had just even going back there (in practice on Tuesday) making all the calls, getting people lined up. He’s always been good at that, so that’s been impressive.”

For Linton it is a return to defense after becoming exclusively a running back. He has one tackle this season, coming in the game against Texas Tech in the season opener. Overall, Linton has played in five games this season on defense and 24 games in his career. He has a total of seven tackles.

Playing on defense is not the issue for Linton when he steps onto the field Saturday against ULM (3 p.m., SEC Network), but he has had to go back and dust off the playbook and learn some of the verbiage that defensive coordinator Wesley McGriff has installed.

“It really didn’t change much,” Linton said. “Coach McGriff, he tried to simplify the defense a whole lot more. The things that I did learn, they just kind of came back quick to me. One of those things that I take pride in myself is having a high-football knowledge. Having a high-football knowledge is you can play fast. I take pride in watching and just learning my opponent each week and the scheme so I can play faster.”

It will be unfamiliar territory for Knight, who will be making his second appearance on defense in a collegiate game but it will not be a completely foreign concept to him. During his four years at Pearl High School, Knight played in 45 games and had 296 tackles, 11 sacks and 5 interceptions as a Pirate. He was the second-best tackler on the team his junior (123) and senior (117) years.

Knight had one tackle against Southern Illinois earlier this season.

“Tylan, I don’t’ know, he’s like a little pit bull,” Luke said. “He’s just a good player. Going (on defense), faking blitzes, coming out of blitzes. That’s just on the first day but you can tell he’s a natural at it. …It just gives you a little flexibility. When knew when we took (Knight) him we knew special teams and at running back or that STAR position. We just felt like because we were so deep at the secondary we might as well put him at running back and things change.”