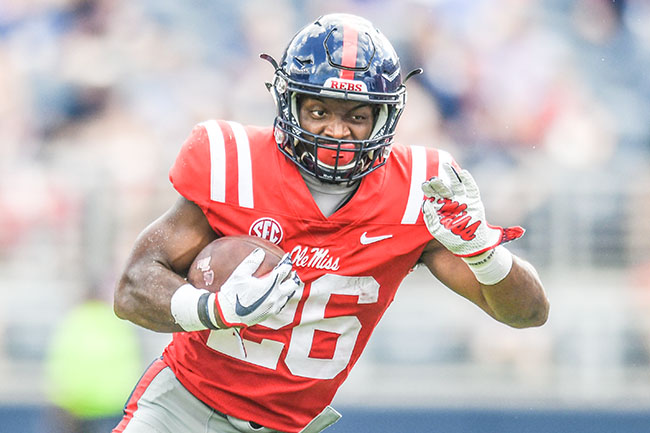 Ole Miss (3-2) returns home after their loss at No. 5 LSU last week in need of a fix on both sides of the ball. The offense sputtered and the defense continued their porous play against the Tigers.

ULM (2-3) comes into the game on a three game losing skid and provides the Rebels an opportunity to get back in the win column. It is the final non-conference game of the season for the Rebels, who finishes the year against six SEC opponents in the final seven weeks.

Keep this page open for updates once the Rebels and Warhawks kick off at 3 p.m.

Ole Miss keeps piling on the points. Matt Corral has completed his first 10 passes of the game and his most recent completion was a 24-yard touchdown catch by Elijah Moore. Ole Miss 70, ULM 14 12:38 4Q.

Ole Miss was forced to punt for the first time in the game after scoring a touchdown on their first nine possessions. Mac Brown’s punt went 44 yards but is returned 71-yards by ULM’s Marcus Green for a touchdown. Ole Miss 63, ULM 14 4:59 3Q.

ULM got deep into Ole Miss territory but another failed 4th down conversion turns the ball back over to the Rebels.

Corral shows off his feet on his second drive of the half. On his second career run, Corral goes 61 yards for his first career rushing touchdown. Ole Miss 63, ULM 7 10:03 3Q.

Ole Miss starts the second half with the ball and Matt Corral comes in at quarterback replacing Ta’amu. The true freshman recorded his first career touchdown pass, an 11-yard catch by Phillips. Ole Miss 56, ULM 7 13:51 3Q.

ULM forced to punt and pinned the Rebels deep. They went 92 yards and scored on a 16-yard pass from Ta’amu to Lodge. The Rebels have 536 yards of total offense.

ULM opts to go for it on fourth down for the third time in the game and fails to convert for another turnover on downs. The Rebels then need only two plays to make the WarHawks pay. D.K. Metcalf hauls in a catch then scampers 62 yards for the touchdown, breaking two tackles. Ole Miss 42, ULM 7 1:43 2Q.

Ole Miss respond following the ULM score. An 8-play drive that goes 72 yards is capped by a 1-yard touchdown run from Scottie Phillips. The running back has 45 yards and two touchdowns on 11 carries in the first half. Ole Miss 35, ULM 7 7:07 2Q

ULM finally gets on the board. After the Rebel defense had gotten a stop on third down, a roughing the passer penalty on Mohamad Sanogo was called to keep the Warhawks’ drive alive. The following play running back Derrick Gore scores on a 11-yard run. Ole Miss 28, ULM 7 9:35 2Q.

It was Ole Miss’ turn to go for it on a fourth down and they find success. On 4 & 3, Ta’amu goes on a quarterback draw and runs 39 yards for his second rushing touchdown of the game. Rebels are running away with this one early. Ole Miss 28, ULM 0 12:13 2Q.

On their third possession, ULM drove all the way to the Rebels 7 yard-line but quarterback Caleb Evans fumbled the ball with the Rebels recovering at the 3.

Ole Miss starts out 2-for-2 with touchdowns on their opening possessions. The six-play drive was capped by a 20-yard touchdown from A.J. Brown. The drive was kept alive after an offsides penalty on ULM on third down then Phillips picked up a fresh set of downs the following play. Ole Miss 14, ULM 0 7:49 1Q.

The Rebel defense forces their first 3-and-out on ULM’s second possession and the Warkhawks get off a 32-yard punt. Ole Miss starts their second drive at their 39.

Ole Miss takes advantage of the turnover and scores on a 2-yard run by Scottie Phillips. The drive was aided by a 51-yard catch from DaMarkus Lodge to get the Rebels in the red zone. Ole Miss 7, ULM 0 10:58 1Q

First two plays are passes from ULM and they got inside the Rebels’ 30 yard-line. The drive stalls and the Warkhawks chose to go for it on 4 & 4 and could not convert for a turnover on downs. Rebells’ ball at their 22.

ULM won the coin toss and opted to receive. The Rebel defense will take the field first.