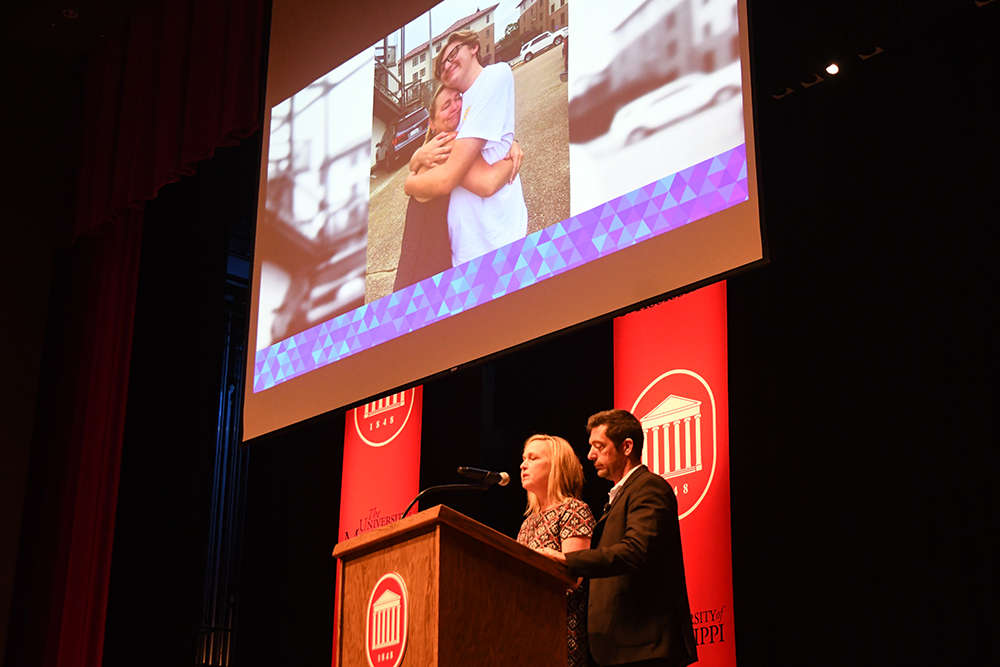 Rae Ann Gruver, left, and her husband Steve speak about hazing at the Gertrude Ford Center in Oxford, Miss. on Tuesday, October 9, 2018.

In 2017, five college students died as a result of hazing.

The parents of two of those victims – Max Gruver and Tim Piazza – spoke to Ole Miss students and community members on Tuesday at the Gertrude C. Ford Center for the Performing Arts with a very clear message.

“Hazing is everyone’s problem and therefore everyone’s responsibility,” Evelyn Piazza, the mother of Tim, said. “Hazing happens every day, but we but we only hear about it when someone dies.”

Tim was a student at Pennsylvania State University who died on Feb. 4, 2017, two days after he sustained injuries from falling down a flight of stairs following a drinking party at the Beta Theta Pi fraternity house.

According to a settlement agreement between Beta Theta Pi and the Piazza family, a doctor estimated that Tim’s blood-alcohol level was between .28 and .36 percent at the time he fell down the stairs.

That amount is roughly four times the legal limit for driving, the report said.

“(Tim) was an amazing person who got hazed, and then ignored, tortured and left to die because a fraternity did not want to get in trouble,” Piazza said.

Gruver, a student at Louisiana State University at the time of his death in Sept. 2017, died from acute alcohol intoxication and aspiration following a Phi Delta Theta initiation game called Bible Study.

The game, Rae Ann Gruver said during Tuesday’s event, involved pledges answering questions about the fraternity’s history. If they gave incorrect answers, the pledges were forced to drink Diesel, a 190 proof alcohol.

At the time of his death, it was believed that Max took at least 10 pulls of the alcohol. His blood-alcohol level was tested at a .495 – more than six times the legal limit.

“The actions of these hazers resulted in my son’s death,” Gruver said. “Max was taken downstairs and left to sleep it off on the couch, and even with obvious signs of distress, no one called 911 to render Max help during the night; something that could have possibly saved his life.”

Given the tragedy in both the Gruver and Piazza families, work is being done to create federal legislation to make hazing a felony across the country.

Currently, hazing is considered a felony in 11 states, with Louisiana implementing the Max Gruver Act in May 2018. The law states that the punishment for those who participate in hazing activities, which result in death, will face up to five years in prison and fines of up to $10,000. For hazing activities that do not result in death, individuals can be fined up to $5,000 and spend up to six months in prison.

Pennsylvania is expected to adopt a similar act in the coming weeks.

In Mississippi, hazing is considered a misdemeanor. Hazing in the first degree could result in up to six months in prison and a $2,000 fine while hazing in the second degree is a fine of no more than $1,000 with no time served.

Gruver and Piazza both expressed the importance of the University community in coming together to change the culture that surrounds Greek life in order to prevent hazing rituals.

“To create a change you have to understand what you want to change, first,” Steve Gruver, Max’s father, said. “If it’s hazing, you first have to admit that the issue exists and then attack it head on. I understand that most of the fraternities and sororities have creeds, and if you live by that creed then hazing can’t exist within that parameter. So use that and use the law to help create that change.”

The trio all agreed that not all chapters participate in hazing, but stressed that the activity is still the problem of all involved in Greek life.

“If you know others are hazing and something goes wrong, or something goes wrong in another organization or chapter, it takes all of you down,” Rae Ann said. “It takes the whole community down. It is disrespectful to the entire University. If one chapter is hazing and someone gets in trouble or, God forbid, somebody dies, the whole community goes down. It’s over and I don’t think anyone wants that to happen. ”

The Piazza and Gruver families are partnering with the National Panhellenic Council to help create legislation that families of hazing victims will take from state to state in order to make hazing a felony.

However, even with their efforts to install legislation across the country, the goal for these families is not to end Greek life, Steve said.

“If the rise in hazing keeps happening, Greek life is going to end on its own,” Rae Ann said.