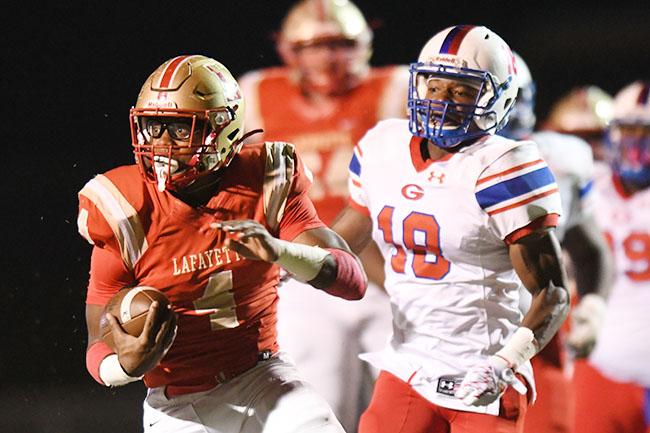 Lafayette High's Jamie Shaw (4) runs for a touchdown in the first quarter against Grenada High at William L. Buford Stadium in Oxford, Miss. on Friday, October 12, 2018.

OXFORD – For the third straight week, the ‘Dores showed who the better team was early and often.

The Lafayette Commodores used their ground game and a valiant defensive effort to knock off the Grenada Chargers 55-21 at William L. Buford Stadium Friday. The Commodores won their third straight game and await a trip to Olive Branch next week to play Center Hill.

Lafayette head coach Michael Fair emphasized to his team after the game that their practices show on the field. It did so tonight according to Fair.

“I think that is the key to what we have going on now,” Fair said. “We are playing well, but I think it goes back to how we are practicing and preparing as a team. This group comes to work every single day. I think they are building something through the week and just having fun on Friday nights.”

The ‘Dores wasted little time getting the offense going on the ground. Jamie Shaw raced 34 yards to the end zone for the first score of the game and followed it up with another touchdown on fourth-and-goal. Shaw ended the night with three total scores. Lance Stewart later had a 61-yard touchdown to make it a three-score game midway through the first quarter.

“I thought our offensive line blocked really well,” Fair said. “There were times when they had 10 guys in there and we just put another big guy in there and try to move him out of the way. We got in their way just enough. The backs had a big night for us, but I think it all starts up front with our line, tight ends, and H-backs.”

Brandon Turnage had points through the air with a 35-yard catch late in the first half.

Randy Anderson added a touchdown on the ground to begin the third quarter. The back-ups came in for the majority of the second half. Trekyus Woodall and Xavion Stokes also had touchdowns.

The Commodore defensive line did a lot of damage against a two running back system. The majority of the damage done by Grenada came late in the second half.

“They (Grenada) like to run the ball in between the tackles, and our guys took that as a challenge,” Fair said. “Our defensive line has come a long way this past month. If I had to say what our most improved group is right now, I would say our defensive front.”

Lafayette’s only forced turnover came in the second half with D.Q. Watkins recovering a fumble late in the third quarter.