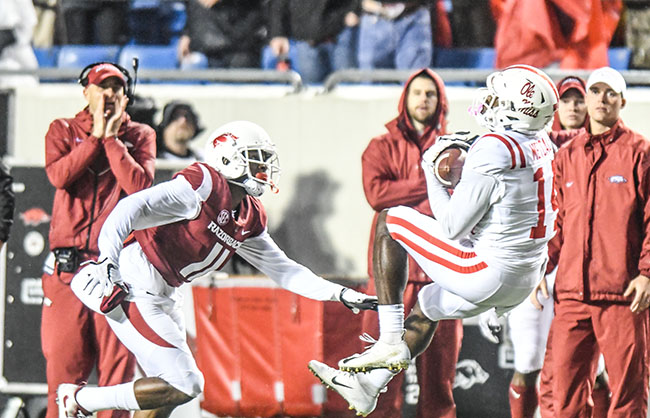 Standout receiver D.K. Metcalf will miss the remainder of the season after suffering a neck injury against Arkansas on Saturday.

The severity was unknown after the game but once MRI results came back on Sunday the injury was worse than originally feared.

“Obviously very disappointing,” Ole Miss head coach Matt Luke said. “They put a lot into this and it’s so important to them. But, in the grand scheme of things I think long term is what you have to look at and I think (Metcalf) is going to be fine.”

Metcalf had one catch for 49 yards on the Rebels’ opening drive on Saturday. He came out of the game shortly after that opening drive and did not return to the field.

Luke said the injury will not affect Metcalf in the long-term and is not related to his spinal cord and surgery is a possibility.

Through the first seven games of the season Metcalf was second on the team with 569 receiving yards behind only A.J. Brown (650). Metcalf led the team with five touchdown catches.

Moving forward, the Rebels will look to Braylon Sanders and Elijah Moore to fill the role and the production they are losing with Metcalf’s absence.

Sanders had 3 catches for 35 yards and was targeted 7 times against Arkansas. In 7 games played, he has 12 catches for 247 yards and a touchdown. Moore has played in every game this season and has 11 catches for 157 yards and 2 touchdowns.

“Between (Sanders and Moore) we’ll still have four or five guys out there that we’re confident in,” Ole Miss offensive coordinator Phil Longo said. “You can’t replace a D.K. Metcalf, so we’re not going to try to. We’re just going to look at the weapons and the arsenal now and use them as best we can.”

This is the second season-ending injury Metcalf has suffered. During his freshman season Metcalf suffered a broken foot against Wofford on Sept. 10, 2016 in his second game. He was granted a medical redshirt.

“You think about their long-term well being and making sure they get the best care they can,” Luke said. “Our guys will bounce back. They’re resilient.”