Kossuth sweeps Water Valley in first round of Class I playoffs 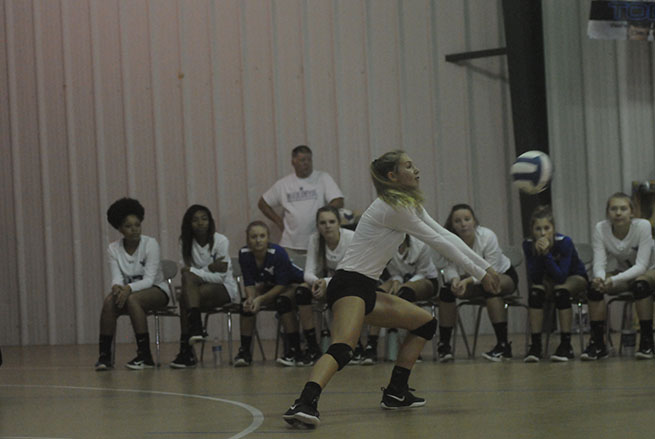 Water Valley's Lillian Lindsey receives a volley from Kossuth during their first round match of the Class I playoffs in Water Valley on Thursday. The Blue Devils lost 3-0. (Jake Thompson)

WATER VALLEY — After a successful regular season the postseason was not as kind to Water Valley.

The Blue Devils were swept by Kossuth 3-0 (16-25, 25-27, 12-25) in the first round of the MHSAA Class I volleyball playoffs inside the Water Valley High School multipurpose building on Thursday.

Kossuth will face the winner between Hickory Flat and St. Joe’s first round match in next week’s quarterfinal round. Water Valley’s season comes to a close with a record of 15-8.

“They came out and they fought. (Kossuth) fought just as hard. I thought it was a good match up,” Water Valley head coach Allison McCain said. “That last set, I think we just got in our heads. We had a great season. Won district, went undefeated. It was the best season we’ve had since I’ve been here.”

The first two sets saw the Blue Devils have to rally from early deficits and take a lead in each. The Aggies managed to fight back themselves and snatch away the win. The second set went back and forth several lead changes.

“They started blocking,” McCain said of what adjustments Kossuth managed to make during sets. “They started blocking Lillian (Lindsey) which is one of our big hitters. They stopped her and saw our weak spot. They found those deep corners and pushed to them and took advantage. That was the big thing to me.”