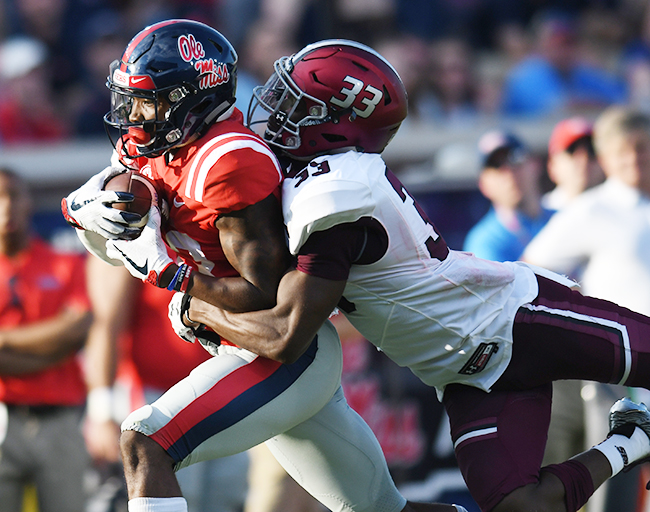 When Ole Miss and Auburn kickoff on Saturday at 11 a.m., there will be plenty of questions to be answered.

How will the Rebels respond after their late-game comeback over Arkansas last week in Little Rock? Will the defense thrive off their performance against the Razorbacks in the final minutes? Will the offense still be the same points-producing machine without D.K. Metcalf out wide?

The first two questions will be answered as the game progresses, but the last question could be answered rather quickly.

It all hinges on the play of Braylon Sanders. The sophomore was tabbed to be Metcalf’s replacement after the Oxford native suffered a season-ending neck injury early in the game against Arkansas. Sanders entered the game during the first quarter and finished with 3 catches for 35 yards.

“(Metcalf) went down, I hate it for him,” Sanders said. “I wish him the best, but I always have the next man up mentality. So, I just got to step up. I have big shoes to fill.”

Sanders learned the injury was more severe than originally thought while riding around in his car when Metcalf gave him a call to break the news. Sanders noted Metcalf was making jokes in good spirits.

Now, the Rebels must move on to life after Metcalf, for at least the rest of this season. Sanders is not getting tossed into the fire unprepared. He has played in every game this season, including against Southern Illinois where he had his best game with 4 receptions for 133 yards and a touchdown.

“Braylon has had a tremendous season,” Ole Miss wide receivers coach Jacob Peeler said. “I think it was Week 1 against Texas Tech, he got a lot of reps and made some big plays. Then Week 2 (DaMarkus) Lodge was out with an injury and he had over 100 yards receiving. I trust him 100 percent. He’s learned from those guys and he’s a starter in our mind.”

There is the possibility of moving A.J. Brown outside to provide some of the same physical play Metcalf would bring, but Peeler and the rest of the staff have faith that Sanders can pick up where Metcalf left off.

“I’m comfortable,” Sanders said. “I finished the game at Arkansas and everything was smooth. At the end of last season I got all the jitters out. I was just more comfortable on the field and I was just doing my job.”