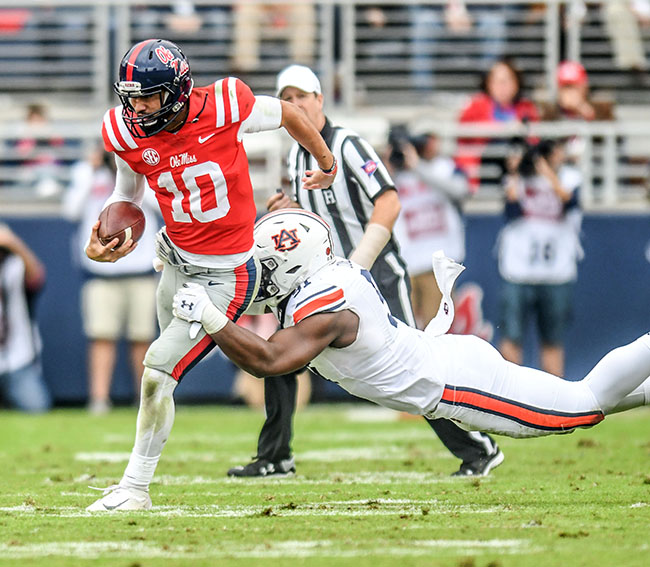 Ole Miss was coming off their comeback win over Arkansas in Little Rock. Auburn was trying to shake off their stunning home loss to Tennessee.

Once the clock struck zero on Saturday afternoon, one would have thought those roles were reversed.

Auburn defeated the Rebels 31-16 inside Vaught Hemingway Stadium in one of the Tigers best offensive performances of the season. For Ole Miss it is back to the drawing board after another poor defensive performance.

“I think the story of the day was pretty obvious. When you get in the red zone you’ve got find a way to score touchdowns,” Ole Miss head coach Matt Luke said. “I also thought our inability really hurt us at times. I felt like our defense played well in the first half and kept us in it.”

The Rebels were a perfect 4-for-4 in the red zone but three of those trips resulted in field goals. Their lone touchdown of the day was a 12-yard catch by A.J. Brown with less than three minutes left in the game.

With the score 10-6 in Auburn’s favor at halftime, the thought of the Rebels being mostly a second half team this season gave way to the idea the game could come down to the wire. Instead, the Tigers scored touchdowns on three consecutive possessions to begin the third quarter and breaking the game open.

Following his 528-yard performance against Arkansas, Jordan Ta’amu struggled to find the same success on the ground that he had last week. The senior threw for 324 yards but rushed for only 43 on 19 carries. He was also unable to find any rhythm with constant pressure by Auburn’s front seven on defense and getting sacked five times.

“We had a lot of opportunities to score down in the red zone,” Ta’amu said. “We’ve just got to finish.”

Coming into Saturday’s game Auburn was ranked 12th in the conference in rushing offense with 158.4 yards per game. Against the porous Rebel defense they were able to run for 269 yards and three touchdowns. JaTarvious Whitlow did most of the damage with 170 yards on 19 carries.

Auburn quarterback Jarrett Stidham threw for 215 yards and a touchdown.

The Rebels enter the bye week at a much-needed time for an injury-riddled defense to rest. They will return to the field on Nov. 3 when they host South Carolina.