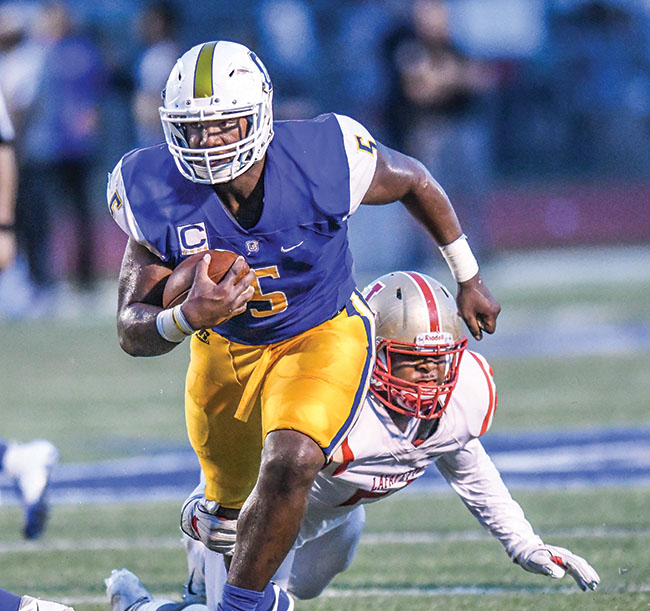 Oxford High’s Jeremiah Pegues (5) breaks the tackle attempt by Lafayette High’s Jaquon Buford (52) at Bobby Holcomb Field on September 7, 2018. Oxford and Lafayette will remain in Class 6A & 5A, respectively, for the 2019-21 school years.

OXFORD — There will be another shakeup in all six classifications of the Mississippi High School Activities Association. The MHSAA released enrollment numbers from the Mississippi Department of Education on Monday.

The numbers were used to determine which schools will be in which classification (1-6A) for the 2019-2021 athletic years, which they announced on Tuesday. The process occurs on a two-year cycle.

Lafayette, Oxford and Water Valley all remained in their respective classification.

Since 2016 – the last time enrollment numbers were released – Oxford gained four students, going from 1198 to 1202. The Chargers are ranked as the 24th largest school in Mississippi. They moved into the highest classification of the state two years ago.

Two years ago, Lafayette entered into Class 5A for the first time with an enrollment number of 806 and will occupy 1-5A for another two years. Since 2016, the Commodores school population decreased by one student to 805. Lafayette is the 58th largest school in the state according to the MHSAA’s numbers.

Water Valley had a marginal decrease in enrollment numbers from 2016 and could barely stayed in 3A. The Blue Devils went from 319 students two years ago to 286 students enrolled to start the 2018-19 school year. They will be the second smallest school in 3A with Clarkdale (283) being the last school to make the cut.

Once again, Tupelo High School is the largest school in the state despite losing nearly 100 kids since the last count by the MHSAA. The Golden Wave have 1,892 students enrolled, a drop from the 1,991 students enrolled to start the 2016-17 school year.

Two examples are Olive Branch and Germantown High Schools. Both schools were classified as two of the largest schools in Class 5A in 2016, both made the move into Class 6A after an increase in enrollment numbers. Olive Branch increased their enrollment by 42 students with a total of 1,122 for this school year. In 2016, they had 1,080 students and missed 6A by one student. Germantown was the third largest 5A school with 1,075 students but now have 1,193, which should put them firmly inside the 6A grouping.

Columbus, which was the last school to be classified in Class 6A with 1,091 kids in 2016 dropped down to 959 students. The Falcons moved down to 5A.