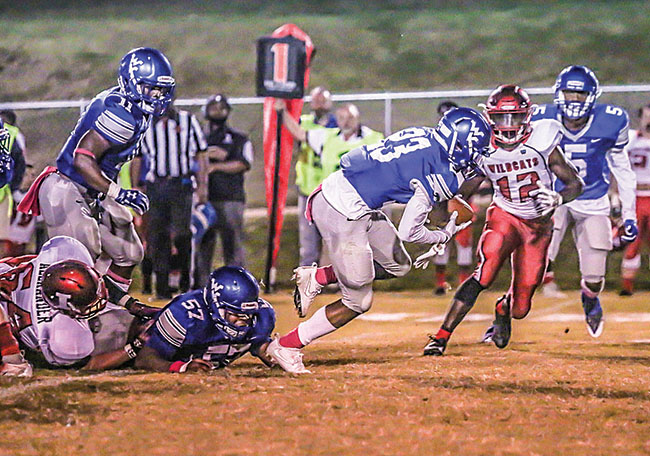 KELI LINDSEY Water Valley's Damicah Hervey (23) picks up an Independence fumble and returns it for a touchdown at Bobby Clark Field in Water Valley, Miss. on Friday, October 19, 2018

OXFORD — This week’s game between Water Valley and North Panola for the Region 2-3A title has been one of the worst kept secrets in high school football this season.

Months before the season began, it has been on everyone’s mind that Friday’s game in Sardis would have significant importance.

Now, the game is here and can be on the forefront of locker room discussion.

“If you listen close and you have your ear in the wind, the kids know. They’re smart. They know what’s going on,” Water Valley head coach Brad Embry said. “They know North Panola’s good and they knew this game was probably going to happen, to be honest, back in the summer. They knew they had to take care of business to get to this point, too.”

When dissecting the numbers that Water Valley (9-1, 4-0 2-3A) and North Panola (8-1, 4-0) have put up this season, there are a lot of similarities. The Blue Devils have scored 387 points to North Panola’s 386. Each have shutout opponents three times this year and are holding opponents to less than 9 points per game.

If you break down the numbers in region play, Water Valley is holding opponents to 3.8 points a game to North Panola’s 8.3.

The Blue Devils have wrapped up hosting the first round of the Class 3A playoffs, which begin next Friday, but they would like to add their first region championship since 2011 to the trophy case as well.

To do that they know what must transpire, slowing down North Panola’s K.J. Jefferson. The Arkansas commit is the engine that makes the Cougar offense go. This eason, Jefferson has thrown for over 2,000 yards and rushed for over 600. Jefferson has a combined 30 touchdowns through the air (24) and on the ground (6).

Jefferson is not the only threat the Blue Devil defense has to keep tabs on. Running back Clarence Taylor is also a threat with his legs. The senior has rushed for a team-best 659 yards and 13 touchdowns. Tyler Shorter leads the receivers with 788 yards and 7 touchdown grabs.

Shorter and Quarderious Jones were selected for the North roster in the Bernard Blackwell Classic and Jefferson was tabbed to play for Mississippi in the Mississippi-Alabama All-Star game in Montgomery.

“They’ve got a lot of athletes all over the field,” Embry said. “Two of their four defensive backs were picked for the Bernard Blackwell game and the other guys, I don’t see a lot of difference in them. They’re the same caliber of athlete. They’re big, physical and athletic and that sounds a lot like our defense. We’re very similar defensively.”