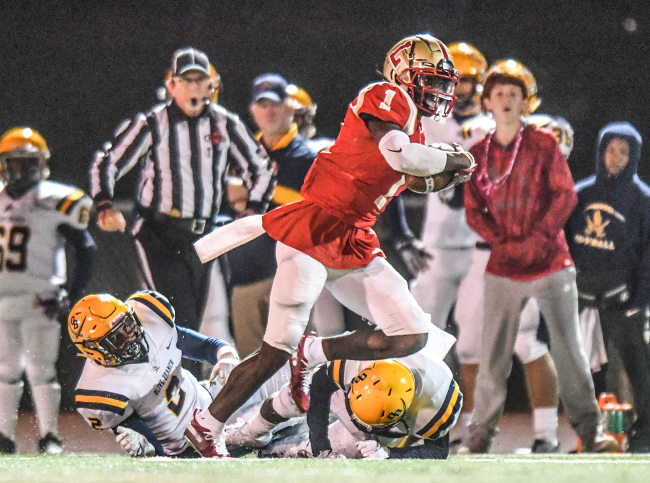 A tale of two quarters resulted in heartbreak for the home team on senior night.

The Olive Branch Conquistadors used 14 unanswered points in the fourth quarter to defeat the Lafayette Commodores 24-21 and lock up the No. 2 seed in the class 5A playoffs. The loss snaps a four game winning streak for the Commodores (7-3, 4-2 1-5A). They now await a road trip to Lake Cormorant next week with playoff implications on the line.

An Olive Branch (9-1, 5-1) fumble with 1:03 left gave the Commodores new life down three points on their own 27 yard line. Randy Anderson completed a hail mary pass to Quinshun Twilley inside Olive Branch’s five yard line with three seconds left. That play could not be capitalized on due to a missed field goal.

“Our kids fought to the end, but they made one more play than we did,” Fair said. “It seems like that has been a reoccurring thing around here. We have to find a way to win the close games. Our guys are here to do it, but we have to some through when it counts.”

Lafayette’s run game was shut down for the majority of the contest, forcing them to rely on Anderson and his weapons in the passing game. The only rushing touchdown came from Lance Stewart to begin a dominant third quarter for the ‘Dores.

Anderson finished with two explosive passing touchdowns. The first was a 75 yarder to Brandon Turnage who broke multiple tackles while doing so to give the ‘Dores a 7-3 lead late in the first quarter.

The other was to Dorian Webb who raced 81 yards from the flat to score late in the third quarter. That score gave the Commodores their second touchdown in the second half and their biggest lead of the night up 21-10.

“They were stacking the box on us and did a really good job. We had to throw it a little more,” Fair said. “Randy made some really good decisions and our guys on the outside made some big plays. Some nights, you’re going to have to do that.”

“We only gave up one long drive, and it was right there at the end. Other than that, we put our defense in bad spots. You can’t do that against a good football team,” Fair said. “When it comes down to it, we have to make plays on third down.”

Quentin James finished with an interception late in the first half.