‘Be Bold, Be Brave, Be Beautiful:’ Thompson uses cancer story to inspire others

How did this happen? Why me?

Perhaps these are common questions for someone diagnosed with breast cancer, but for Precious Pratt Thompson, she asked, “How can you go every year and go through this process, and it still happen?”

Thompson, 45, pondered this question because ever since she was 35, she had a normal mammogram. In July 2015, her test results were clear, as usual, but in September of that same year, she began having soreness and pain in her chest, feeling a soft mass in her breast. 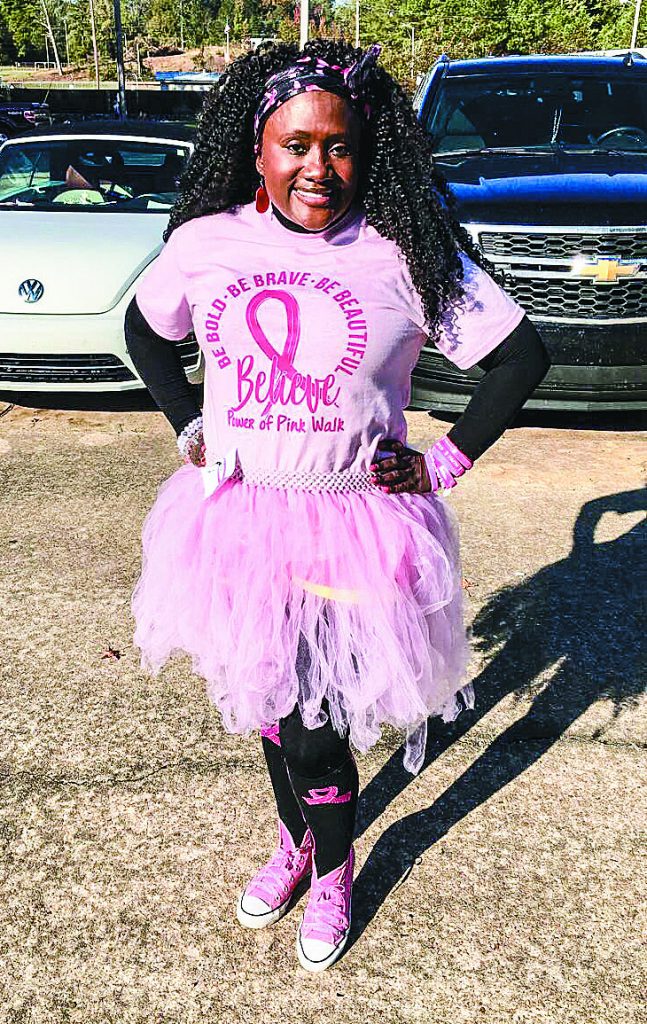 Because of a recent mammogram, her doctor advised her that the mammogram might be the cause of irritation and to wait a couple of weeks. Still in pain, Thompson returned a week later for a biopsy, which doctors submitted for testing.

With options to either start treatments in an attempt to shrink the mass and do chemotherapy or have a mastectomy to remove the entire breast.

Fortunately, in December 2015, doctors only had to conduct a right mastectomy, ensuring there would be no chance of cancer spreading to her other breast.

Married with four children, Thompson is the senior secretary at the University of Mississippi Small Business Development Center. She is also working on her bachelor’s in social work as a part-time student.

“It was just like a whirlwind,” she said, almost three years cancer free after the diagnosis.

According to Thompson, her doctors called the situation an “abnormal case” where a soft mass is cancer.

In the treatment and recovery stages, Thompson did a year of chemotherapy and 33 days of radiation in 2016 at the Baptist Cancer Center. Not allowed to miss a day of radiation besides Saturday and Sunday, she had to go every day for a 15-minute visit or face restarting the radiation process.

“The process was about three minutes. Undressing and dressing took longer than them just actually shooting the area with radiation,” she said.

This past December, she had reconstruction surgery of her right breast. Finishing the inpatient process in February, Thompson said they did tattooing to restore the natural look.

Describing herself as independent, Thompson said her first major life change was depending on others. Her mom became her “little maid service” because she was constantly sick from chemotherapy.

“She had to help me with everything,” Thompson said. “I would be sick and she’d have to come help me get food for the kids. She’d even have to help me get a bath and stuff. It was just that bad.”

The chemo also affected her physical appearance. Always having had long hair, Thompson found her hair loss to be extremely difficult to deal with. When the chemo caused it to shed, she cut her hair into a short style and donated her ponytail.

Shortly after Thompson cut her hair, it began coming out whenever she touched or ran her hand through it, so she asked her sister Victoria Jennings to shave it. Reluctant at first, Jennings shaved it, realizing it would make Thompson feel better.

“She had long, pretty, black hair, and when it started coming out, she was like, ‘Oh, my God.’ I think that’s when she realized it was real,” Jennings said. “I think I was just in tears while I was cutting it because I was like, ‘God, I don’t want to cut her hair.’”

Witnessing most of the pain her sister endured, Jennings said that moment and the hair loss, overall, was the hardest part. To Jennings, nothing phased the toughness of her sister, not even the breast removal.

After seeing Thompson without her long hair, Ashley Herrod, her friend, made six wigs of varying styles for her.

“My daddy had just died from cancer when Precious found out,” said Herrod. “When she came to my house, she was bald headed and I started crying. It hurt me so bad. I was like, ‘Okay, I have got to do something about this. She cannot walk around here with her head bald like that.’ That’s how I started.”

While pray helped Thompson cope with her feelings of depending on other people, the wigs Herrod made boosted her confidence.

“Every day, I could change my hairstyle; I could look different,” Thompson said. “I could get up and just pick which one I wanted to put on and just go. That really made me make it through as far as the hair and self-esteem part.”

Other than the major life changes of losing her independence and hair, she lost her fingernails all the way down to the nail bed, leaving only flesh. Now, besides her eyebrows, her hair and nails have grown back.

“I, finally, just got these,” she gleamed as she held up her hands. “I was wanting to go get my nails done.”

Although her surgery, chemotherapy, and radiation are complete, Thompson will take the hormone-blocking pill letrozole for the next eight years.

Other than enjoying her children and one grandchild, Thompson shares her story, advocating for breast cancer awareness. She said others have been checked and found cancer after hearing her story.

“I always tell my Mama, God put me through this to show other people how they can be strong and how they can make it because I was willing to share my story and to tell other people,” Thompson said. “Well, I guess he’s just using me for this and letting me make it through to help other people.”

At first, she only intended to share her experience through social media, but realized putting a face to a story is better.

“People want to see a face. They want to say, ‘She doesn’t look like she had cancer or look how good she did and made it through,” she said.

Since then, she’s spoken at churches in Oxford and in surrounding areas of her hometown Calhoun City. Also, she’s spoken on the Ole Miss campus, including at the Care Walk. The cancer center even asks her to distribute information about cancer while telling her story.

All in all, as a cancer survivor, Thompson is blessed to still be here.

“I’ve seen people that have done chemo with me, got finished and cancer free,” she said. “Then, I go back my next two treatments for chemo and she passed away; like, it came back. Everybody doesn’t make it. Everybody doesn’t survive it.”