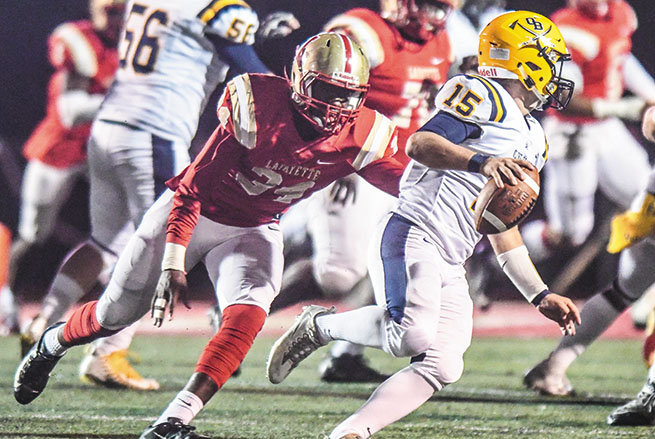 OXFORD — With an opportunity to play their first Class 5A playoff game at home no longer on the table, Lafayette is focusing on what they still control.

With one game remaining in the regular season, at Lake Cormorant on Friday (7 p.m., 105.1 FM), getting over defeat was not an option.

“It lingered a little bit,” Lafayette head coach Michael Fair said. “That was a big game for us and a chance to host the first round of the playoffs. We came together this weekend as a staff and with players and got to a good point where we kind of put it behind us. I thought that was healthy for us, to watch film and put it behind us and see what we could’ve done differently.”

All four teams have been locked in to represent 1-5A in the 5A playoffs, but there are still seeding implications at stake this week. West Point and Olive Branch have locked up the No. 1 and 2 seeds, respectively, but the Commodores (7-3, 4-2 1-5A) and Gators (6-4, 4-2) will determine the final two seeds. The scenario is simple: if Lafayette wins they will be the No. 3 seed and travel to Germantown next week, if they lose they will be the No. 4 seed and head to Holmes County Central for the first round.

“We’ve got some young guys who’ve had to grow up and travel,” Fair said. “We’re no stranger to the yellow dog. We’ve been on it here lately, so it’s not that big of a deal for us. We would have loved to have hosted that first round for our fans and all, but as far as our team’s concerned it’s really as long as there are white lines on that grass out there they’re going to be comfortable.”

As has been the case in recent years, Lake Cormorant has turned things around at the end of the season when it matters. The Gators went 2-2 in non-region play before opening region play with back-to-back wins over Lewisburg and Grenada. Since then they have seesawed between wins and losses weekly. They are coming off a 24-7 win against Center Hill to help secure a playoff berth.

The Gators will be without quarterback Ben Rohrbacher who was injured in their game with Olive Branch on Oct. 19. Last week against Center Hill, Ole Miss commit Jalen Jordan played at quarterback in the place.

“It would be nice to have something light at the end at this point, but that’s not the case,” Fair said. “Things happen for a reason and we’ll be fine. We’ve had to fight our way out of corners before in different games as we’ve gone through the year. Our guys are going to be fine and we understand it’s a big game. I’d expect us to play really well.”

Gray has plenty of ’emotions’ as he begins first…