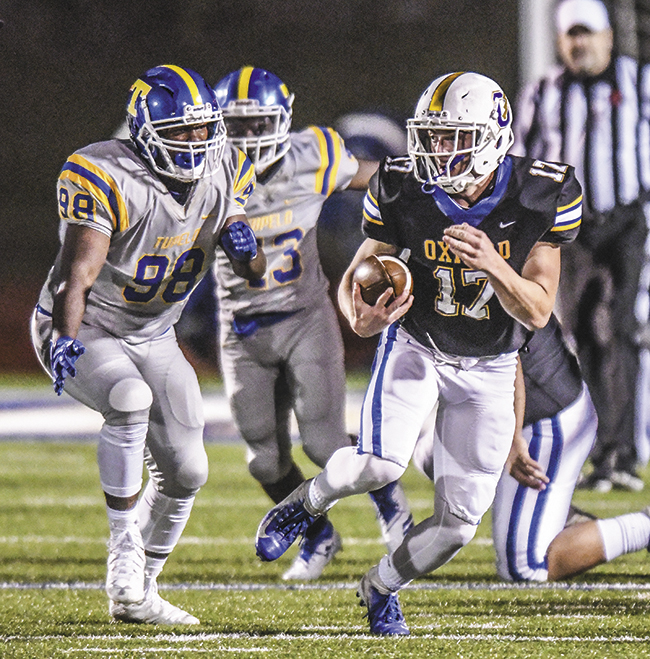 OXFORD — 364 days ago Oxford’s first season in Class 6A had an unceremonious ending. A 34-8 loss at Tupelo eliminated them from the playoffs. Fast-forward to Friday and the Chargers were celebrating a 33-13 win over the Gold Wave at Bobby Holcomb Field.

It was a different feeling afterwards with head coach Chris Cutcliffe discuss with his players about next weeks’ game, instead of discussing when the final team meeting of the year would be held.

“That was a big goal for us was to host a first round playoff game,” Cutcliffe said. “I’m very proud of our team for getting that done. We have a huge challenge in Madison Central. Another great team down there.”

Oxford quarterback John Meagher had one of his better games of the season with 4 touchdowns (2 rush, 2 pass), sparking a fast start for the Chargers. Meagher scored the first two touchdowns of the game with runs of 3 and 2-yards, respectively. He finished with 191 passing yards and 77 rushing yards.

“I don’t think we’ve played great the past couple weeks and I we had a great week of practice,” Meagher said. “Everything just clicked for us tonight. It was a great win. We thought we could take some deep shots on the corners and we thought we could run the ball on them.”

With a 23-point lead coming out of halftime, Oxford’s defense managed to slow down Tupelo’s powerful run game fueled by Jaquerrious ‘J-Rock’ Williams. Coming into Friday’s game, Williams was averaging 158.6 yards and 2.1 touchdowns a game. The Chargers held him to 68 yards on 20 carries and kept Williams out of the end zone.

Tupelo’s touchdowns came off a 78-yard catch by Ole Miss commit Jordan Jernigan in the first half and a late touchdown in the final minutes of the game from Jarius McGinister.

“We know, obviously, (Tupelo’s) running attack is so good. That was something we wanted to stop,” Cutcliffe said.

In the first half Byron Pearson snagged his seventh interception of the season, tying the school record set by KT McCollins in 2014.