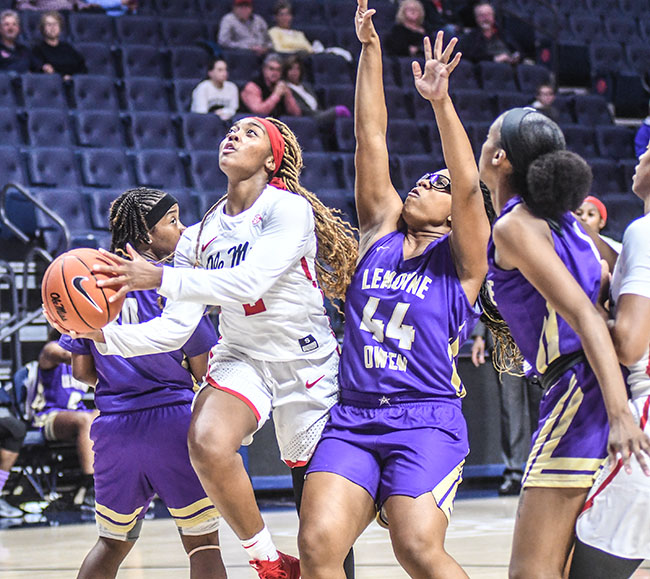 OXFORD — The game did not count, but the results on the floor did for Yolette McPhee-McCuin. Ole Miss defeated LeMoyne-Owen 79-45 in exhibition play at The Pavilion on Friday afternoon in McCuin’s debut as the Lady Rebels head coach.

It was a tune-up for Tuesday’s official season opener against Norfolk State.

“That was our first 40-minute game, so I was excited to get our young ladies out and give them an opportunity to play a full game,” McCuin said. “There are a lot of things that we want to improve on moving  forward but at the same time there are things I saw that I liked.”

McCuin got most of the roster’s newcomers into the game with seven of them seeing time on the floor. Of the fresh faces, La’karis Salter led the Rebels with 12 points along with a game-high 6 assists. Crystal Allen scored 11 points.

After missing all of last year due to injury, Mimi Reid had a game-high 8 rebounds and scored 11 points.

The Rebels got off to a torrid pace, jumping out to a 20-6 lead after the first 10 minutes. Another 20-point quarter gave them a 27-point lead over the Lady Magicians at the break. The pace slowed in the second half but the Rebels managed to maintain a healthy lead throughout.

“We are a team that will continue to improve our conditioning as the season goes on,” McCuin said. “Everybody was excited at first, which is normal. When you play an opponent that you, in your mind, think that you’re better than you start to get bored. I thought that we did that in the third quarter and after that I challenged them.”

The only issue for Ole Miss was at the free throw line. The Rebels went 11-20 at the charity stripe for a 55-percent clip.

It was a successful return to the court for the lone starter from last year’s team. Shandricka Sessom played in her first game since suffering her season-ending ACL injury last year. She logged 10 points and 5 rebounds in 24 minutes played.