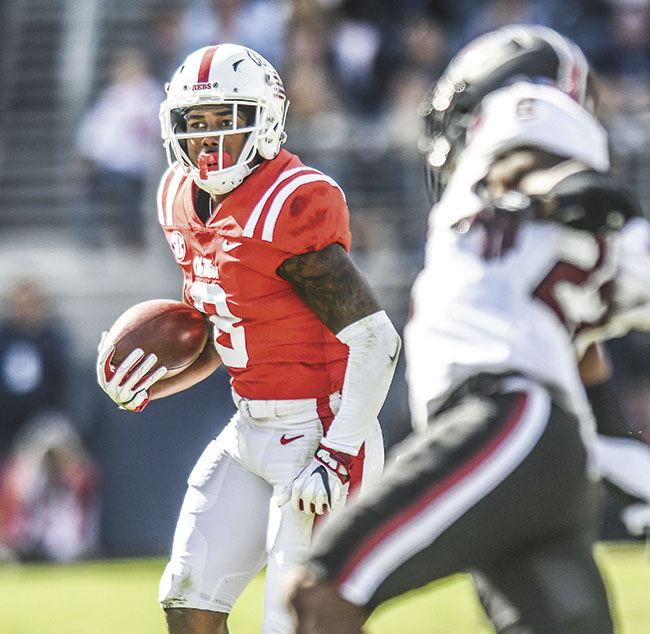 OXFORD – Two weeks after the loss of D.K. Metcalf for the season, the Rebels seem to have found their replacement in an 18-year-old: true freshman Elijah Moore.

Moore broke out this past Saturday, totaling 11 receptions and 129 yards in the home loss to South Carolina. His 11 receptions broke the Ole Miss freshman record.

Moore had played in five games this season prior to Saturday, spelling A.J. Brown in the slot, and never gaining more than four receptions. Against the Gamecocks, Brown shifted to play more outside, allowing Moore a more defined role in the slot.

“I think Elijah solidified a place here weeks ago,” said offensive coordinator Phil Longo. “We do miss D.K. (Metcalf) right now, but the one thing that space is affording us is affording Elijah an opportunity.”

Longo compared having two great inside receiving threats in Moore and Brown to when Kliff Kingsbury and Texas Tech had both Baker Mayfield and Patrick Mahomes on the team in 2013: “It’s tough. You got two really, really good players.”

Elijah Moore, a former four-star recruit, came out of high school at St. Thomas Aquinas in Fort Lauderdale as the nation’s 25th ranked receiver according to ESPN’s 2018 recruiting rankings. He was the Rebels’ second highest rated signee in the class behind only backup quarterback Matt Corral.

With three games remaining in the 2018 season, and Metcalf sidelined, Moore will see a more expansive role moving forward. Brown will continue to play more outside, ceding his slot snaps to Moore. The larger role bodes valuable looking forward, building blocks for Moore looking into 2019 as well as posing issues to teams for the remainder of this season with Moore and Brown together on the field.

“It just provides different matchup problems for defenses,” said head coach Matt Luke. “With Elijah playing the way he did and with him being a true freshman it gives us a lot of momentum moving forward.”