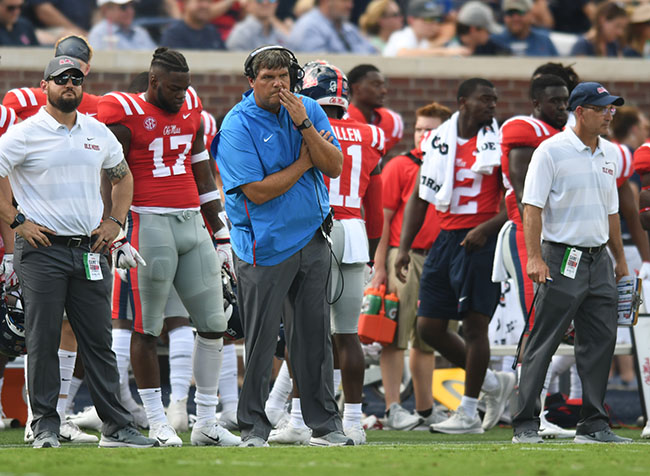 OXFORD – Despite the 5-4 record (1-4 in the SEC), head coach Matt Luke believes Ole Miss is close. Luke likes the effort, the energy and the passion, but thinks it’s the small details that are keeping the Rebels from coming up victorious.

“If you leave your heart out there and you play that way, you’re going to win a bunch of football games,” Luke said. “But the attention to detail is what it takes to get you over the hump.”

Lately, this seemingly simple lack of detail is coming in the form of explosive plays. Just in last week’s 48-44 loss to South Carolina, the Rebels surrendered seven ‘explosive’ plays of 20 or more yards, including one 75-yard touchdown pass. Additionally, special teams allowed the opening kickoff, a short dribbler, to be returned 90 yards for a touchdown.

However, explosive plays are not the only point of emphasis. Luke singled out tackling, making plays on the ball as a defender and redzone turnovers as other areas of attention. He was quick to admit some of the errors are technical: “It’s not all on the players.”

Defensively, the focus lies in the trenches. Saturday at Texas A&M, the emphasis will be on stopping the run. Against South Carolina, Ole Miss allowed Mon Denson to rush for 100 yards on only 11 carries. Denson became the third rusher in three weeks to gain over 100 yards on the ground. The Rebels are 1-2 over that stretch.

“If you go into a game in this league and someone rushes for over 100 yards, you’re probably going to come up on the short end of the stick,” said defensive coordinator Wesley McGriff.

At 5-4, the losses have begun to pile up for Ole Miss. After a strong start in non-conference play, in which they outscored opponents 231-106, the Rebels have now dropped two straight. They enter Saturday’s matchup with only one SEC win.

“Those guys aren’t happy about losing, and they’re hurt. But if you want to win games in (the SEC), the attention to detail has to be there,” Luke said. “You may be able to get away with some of that against an average team. But in this league, you can’t do that.”