COLUMN: McCuin up to the task as new era begins 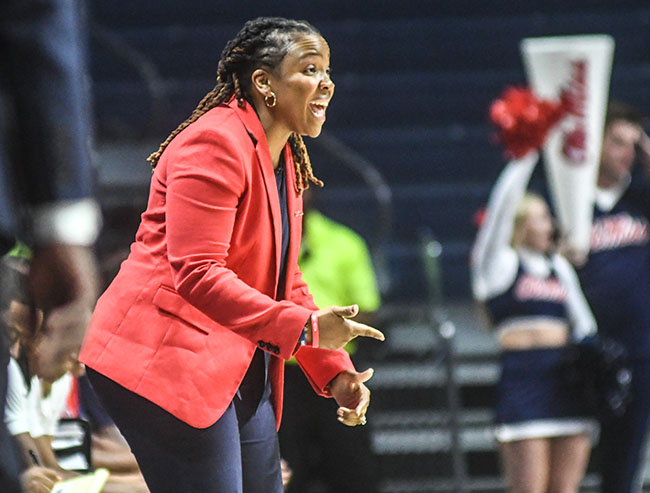 The challenge that lies in front of Yolette McPhee-McCuin is not lost on her. She knows what it will take to turn the Ole Miss women’s basketball program around.

Coming off a year where the Rebels lost 13 games in a row to close out the regular season and winning one game in conference play, athletics director Ross Bjork felt a change was needed at the top and relieved Matt Insell of his coaching duties.

A month later McCuin was hired from Jacksonville State and the rebuilding began. The foundation consisted of Shandricka Sessom, CeCe Muhate and Torri Lewis among the players who stayed. There was a mass exodus of nine players after Insell’s departure. McCuin found nine new bricks to begin the reconstruction.

What has helped with this process is most of last year’s team is not here and McCuin is not one to look in the past when searching for answers about the future.

“I haven’t had to learn about them because they aren’t here,” McCuin said. “From people that have come in and watch our practice has just been excited about the energy. They’re excited about the fact the kids look interested and excited to play.”

McCuin’s approach once she managed to fill a roster in a short amount of time was to not put any pressure on this year’s team. The expectations outside of their locker room are low with predictions of once again being the bottom-dweller of the SEC. As a team, there have not been any season goals set.

The focus is on themselves and not their opponent. McCuin is not concerned with wins or losses at the onset, just getting the program — who is the only SEC team to never reach a Final Four — back to prominence.

The task will not be an overnight event, McCuin knows that and wants everybody else to know that, too.

Ole Miss opened the season on Tuesday night with a 60-42 win over Norfolk State. It was not a pretty game, even sloppy at times, but the Rebels managed to begin the new era on a positive note. Once the game was over McCuin addressed those in attendance and said they are a ‘work in progress.’

The self-awareness could be a positive and a breath of fresh air on a program that has only seen struggles and the constant need of instant results. Their rivals two hours away in Starkville and the national success they have seen also tightened the screws, causing the need to keep up in the arms race.

That did not happen.

Instead the house has been stripped to its foundation in hopes of building a better one. The new bricks that can make this house reach new heights include Shannon Dozier, Crystal Allen and La’Karis Salter.

Another aspect of this ‘work in progress’ is McCuin wanting the feeling of winning to return to her team. The culture of losing was so engrained into the program there needed to be a cleansing. The win over Norfolk State was the first step of that cleansing.

“I’m just relieved for the girls,” McCuin said. “Early on if they can have success that’s what they need to carry on. …People don’t understand the psychology of losing. They’ve lost 15 games in a row, so that’s what they expect. I’m so glad that we won, for them. So that they can understand it doesn’t always have to be what they’ve been used to.”

The new psychology was instilled in first game, now the task for McCuin is to instill it in the remaining 29.

Lafayette opens 5A playoffs at Germantown