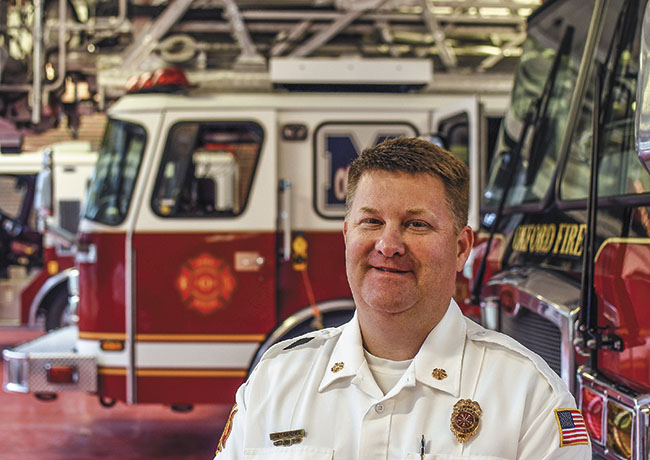 After serving as the interim Fire Chief for the City of Oxford for several weeks, Joey Gardner has been hired for the job on a permanent basis.

Gardner was informed of his hire last Thursday, with the City’s Board of Aldermen approving his appointment to the post during their regular meeting on Tuesday evening.

“We are proud that Joey is now our fire chief,” Oxford mayor Robyn Tannehill said during Tuesday’s meeting. “He has served us for many years as deputy chief and then interim chief. … We are super proud of these people who step up and serve us every day.”

Gardner is an Oxford native who has served with the Oxford Fire Department for 21 years.

“I am honored to be put in this position,” Gardner said. “I will do everything in my power to keep the community of Oxford safe. We have a very good fire department and very good people within the department.”

“Being able to help people is my favorite part of the job,” Gardner said. “That and the camaraderie of the fire department and just being part of a team.”

As the City’s new Fire Chief, Gardner will be tasked with organizing the department to serve an additional 10 square miles as Oxford recently annexed a portion of Lafayette County into the city limits.

“It will be a challenge to get all of that organized and put into place,” Gardner said.

Gardner has two children, Tyler, 17, and Ben, 13, with his wife Hope, who teaches at Della Davidson Elementary School.