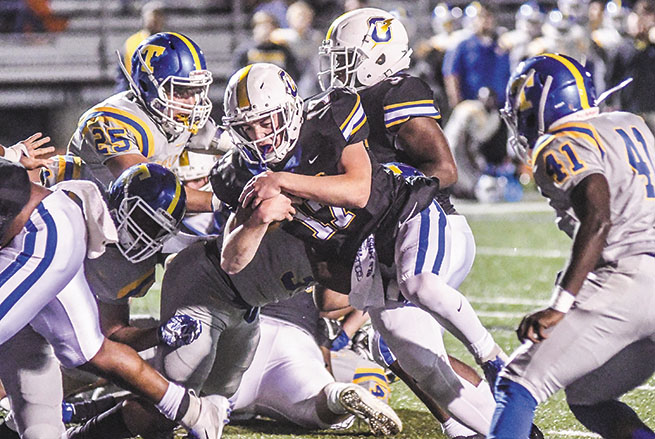 OXFORD — There is not a shortage of motivation in Oxford’s locker room this week. After a year absence from the playoffs the Chargers are once again playing in the postseason and hosting their first Class 6A playoff game in program history.

The celebrating was short-lived after their 33-13 win over Tupelo in last week’s regular season finale. That is because the Chargers are fully aware of what awaits them tonight in visiting Madison Central.

“I think it’s easy to be motivated in a playoff week and once the playoffs get started,” Oxford head coach Chris Cutcliffe said. “We know the challenge we have in Madison Central as a 3 seed. That Region 2-6A is so tough. …The first goal was to win a district championship and we came up a little short of that goal but the next thing on the list is to host a playoff game. It’s something we set out at the beginning of the year to accomplish. We also know now is what you’re really playing for. Nothing that’s come before now really matters.”

Oxford and Madison Central are no strangers to each other, playing twice in the past three seasons. The first meeting occurred at Bobby Holcomb Field in 2015 with the Jaguars pulling out a 31-29 victory. The following year the Chargers returned the favor with a 21-17 win at Madison Central.

Last Friday’s win over Tupelo was one of the Chargers’ best games, offensively. Quarterback John Meagher accounted for all four touchdowns and they re-established their run game, which had been dormant in games prior. It could be tough sledding this week as the Chargers will face a Madison Central defense that is holding opponents to 14.1 points per game.

The offense could get a potential boost tonight in a returning J.J. Pegues. The junior missed the final two games of the regular season with a knee injury and Cutcliffe has called it a day-to-day prognosis throughout and will be a game-time decision.

The Jaguars (8-3) are essentially coming off a second bye week. Last week’s game at Greenville was called in the first quarter after one of the Hornets’ players suffered a severe injury early. Jeremiah Williams is still on a ventilator at the University of Mississippi Medical Center in Jackson.

Madison Central’s offense is a balanced one, with quarterback Jimmy Holiday at the helm. The junior has thrown for 1,198 yards and 14 touchdowns while also running for 921 yards and 12 touchdowns. Sophomore Duke Arnold is behind Holiday with 809 rushing yards and 9 touchdowns on 146 carries.