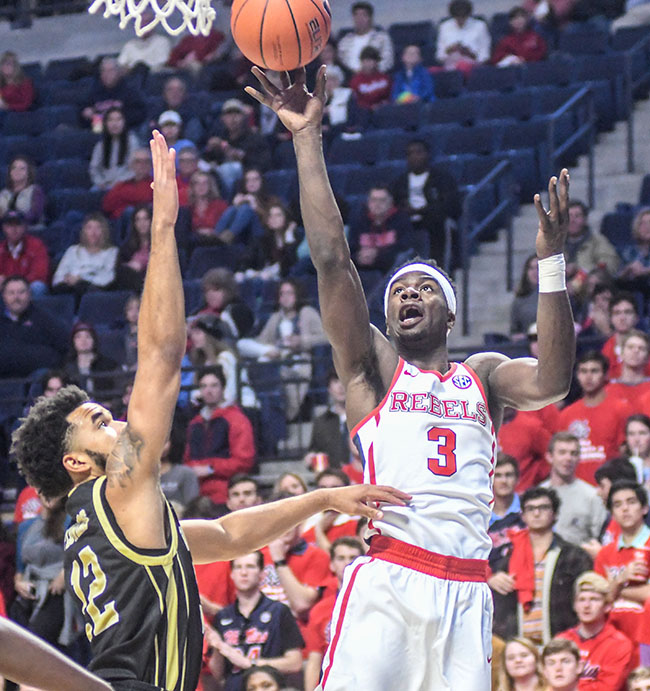 OXFORD – The Kermit Davis era is officially off to a hot start in Oxford. Ole Miss beat Western Michigan 90-64, a dominating performance from the start and the perfect way to usher in a new age of Rebel basketball.

“It was terrific. I was nervous,” Davis said, talking about his first experience on the sidelines at Ole Miss. “I had butterflies. It was a fun feeling for me, especially with the start we had.”

The Rebels jumped on Western Michigan early, using a high-pressure defense to get the offense going. Ole Miss forced eight turnovers in the first five minutes of play, and were leading 15-4 by the first media timeout.

“Very pleased with how we started the game defensively,” Davis said. “I thought we played hard but played within the concept of really trying to guard in a scouting plan. Our energy level has been good at times but we hadn’t done a great job of trying to be detailed.”

Offensively, it all started with senior Terence Davis. The preseason All-SEC second team forward scored 14 of the team’s first 25 points. He finished the night with 17 points.

All-in-all, it was a very balanced attack from the Rebels. Ten different players saw action in the first half (twelve in total) and four scored in double figures. Perhaps the most impressive stat by the Rebels, eight different players had at least one steal.

“It’s kinda how our teams have always played at Middle (Tennessee),” Davis said, comparing this start to his former teams at MTSU. “I think the balance will be a big key, especially trying to win in this league.”

Despite the dominant Rebel performance, there is definitely still room for improvement. With the score as lopsided as it was, Ole Miss only out-rebounded the Broncos by three and the Rebels turned the ball over 12 times.

Regardless of the competition, this is an Ole Miss team that won only 12 games all of last season. A blowout victory against anyone is a step in the right direction, and a promising start to a new era of Ole Miss basketball. The Rebels do not play again until a trip to Butler this upcoming Friday, a game Davis described as a “meaningful, national game.”