Despite playoff exit Oxford views second year in 6A a success 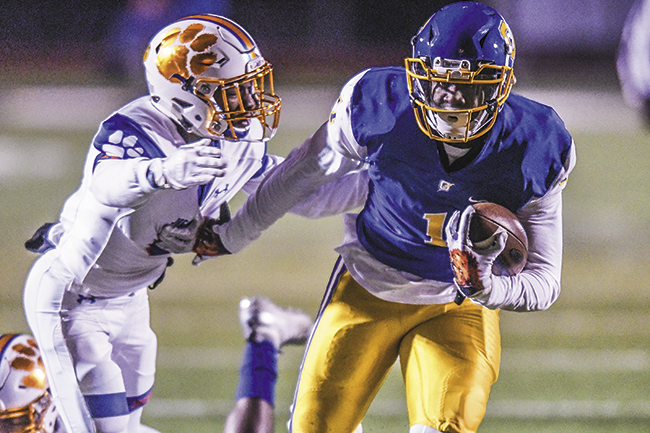 OXFORD — The second year in Class 6A came to an unceremonious end for Oxford last Friday with their 35-3 loss to Madison Central in the first round of the playoffs.

To some it is not considered a successful season if you do not make it to the first weekend of December and are not playing for a state championship. That is still true for the Chargers and head coach Chris Cutcliffe but compared to their 2017 campaign, this season was a success in many ways.

Last year the Chargers missed out on the playoffs altogether in their inaugural season in Class 6A. An 8-4 record and 4-3 in region play was still not enough for the Chargers, who were on the outside looking in with a fifth place finish in 1-6A.

In 2018 Oxford improved their overall record by one win but had a much-improved showing in region play, finishing second behind Horn Lake with a 6-1 record.

“We had a lot of good wins, a lot of big wins,” Cutcliffe said. “Finishing second in the region was certainly a great accomplishment for the team, but I think most exciting thing about it was we only had 14 seniors on our team and by the end of the season only 10 healthy and dressing out. We had a lot of guys coming back from this team so I think there is definitely a lot to build off of heading into next season.”

After their season opener with Warren Central was washed out at the annual Red Carpet Bowl, the Chargers officially started the season with Starkville in the Little Egg Bowl. The year did not start off on the right foot with the then No. 1-ranked Starkville handing the Chargers a 56-7 loss.

Instead of tucking their tail and folding the season in the second week, the Chargers regrouped and began a six-game winning streak and won 9 of their next 10 games. Horn Lake was the only other team to defeat the Chargers in the regular season.

During the six-game stretch Oxford edged crosstown rival Lafayette, handed Pontotoc their only loss in the regular season, overcame a rare Saturday game at Southaven and had a comeback win at DeSoto Central.

“I think we didn’t have issues with selfishness and egos,” Cutcliffe said. “We had people who wanted to do what’s best for the team. I think our coaching did a great job of getting guys ready to play when battling through injuries and things like that.”

The injury bug hit Oxford hard and fast throughout the season. The first key injury was to senior defensive lineman Lamarcus Faulkner who went down after the first two games with a season-ending knee injury. Later in the year the offensive line lost a veteran player when senior center Ryan Lipscomb suffered an ACL injury.

In the second half of the season the Chargers were also without J.J. Pegues for the final three games of the regular season who dealt with a lower leg injury he suffered against Horn Lake. Pegues did return for their game against Madison Central.

Those injuries mixed with a young roster caused some players to be tossed into the fire sooner than expected, but the Chargers benefited from it and constantly improved on a weekly basis.

“It’s the smallest senior class I’ve been around,” Cutcliffe said. “A lot of young guys playing. A lot of guys with their first varsity snaps in the beginning of the season. Watching those guys grow and improve throughout the year was a lot of fun to watch. …Anybody that’s here with us knows we’re heading in the right direction. We’ve got a good foundation that we’re continuing to build on. I think there’s a lot of belief and optimism amongst the guys coming back.”