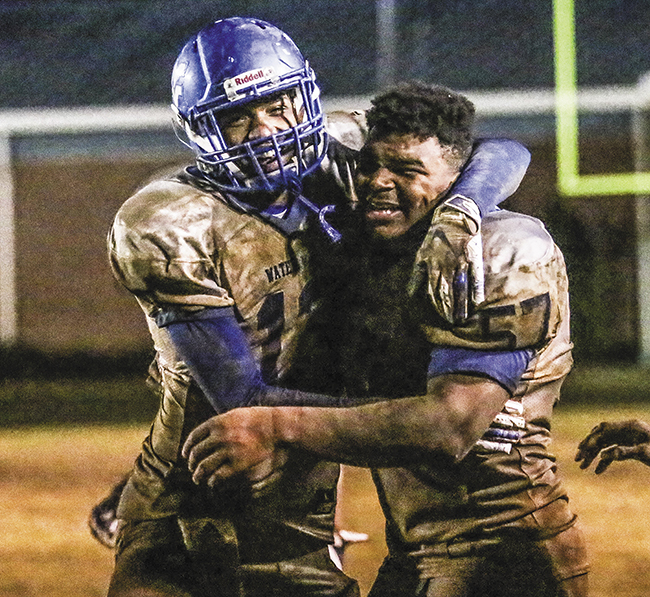 Water Valley's Nate Murphy (13) and Marley Cook (57) celebrate a win over Booneville in MHSAA Class 3A playoff action in Booneville, Miss. on Friday, November 9, 2018. Water Valley won to advance and will play at Houston High in Houston, Miss. (Keli Lindsey)

OXFORD — The past two seasons for Water Valley have been a steady progression and the culmination of a young team having to grow up in a hurry. This Friday could be another night where that patience and growth pays off.

The Blue Devils are back in the quarterfinal round for the first time in seven years with their Class 3A playoff game at Houston (7 p.m., 105.5 FM). It is their fourth trip to the quarterfinals since 2000 with other appearances coming in the 2003, 2010 and 2011 seasons.

A win would send the Blue Devils (11-2) to the North Half championship for the first time in 22 years. The previous two times came in 1990, where they won their only state championship, and in 1996.

Being on the verge of a historical moment for the program has to do with the results on the field, but also with how this year’s team has gone about things. It has been a business-like approach week-in-and-week-out for the Blue Devils. Their attitude would make one think it is just their 14th game of the regular season and does not have as much importance as it does. That is how they like it.

“I can tell by the way they approach their football practice and games that they’re going to be successful young men,” Water Valley head coach Brad Embry said of his players. “They go to work each and every day. I don’t have to worry about them being there. They do things right. They handle their business and that takes us a long way. Obviously they’re good athletes, we’ve talked about that at length. They’re accountable kids.”

If the Blue Devils want to play for a North Half title for the first time since before the Y2K scare, they will have to go through yet another one of the state’s better teams. Houston (11-1) boasts a stout defense and also one of the state’s top running attacks.

Ty Hardin was promoted to head coach ahead of the 2016 season after spending two years as the Hilltopper’s defensive coordinator and has steadily improved the program. After finishing second in Region 4-3A a season ago with a 4-1 record, Hardin led the Hilltoppers to a 4-3A crown this year with a perfect 5-0 record.

“We haven’t played (Houston) a lot but I have watched from a distance,” Embry said. “I know coach Hardin in passing and he’s done a great job of getting those kids, the athletes, out. When you look out there on film you think fast and athletic. He’s done a great job. Since he took over they’ve been a presence in 4A, now 3A.”

Senior running back Jalen May makes the Hilltopper offense go. With 1,776 yards and 28 touchdowns, May is the team’s leading rusher by nearly 1,000 yards. He also splits time at quarterback with sophomore Gage Harrington. May has thrown for 579 yards and five touchdowns.

Water Valley’s offense has not been slowed down much this season averaging 37 points per game, but they could be tested this week. The Hilltopper defense has held opposing offenses to 15.5 points per game.

“They can all run. They don’t have any slow kids on defense, that’s for sure,” Embry said. “They’re really athletic and they pose a lot of problems. I think they’re different from any team we’ve played. We’ll have a plan and I trust our kids are going to take it and execute it to the best of their ability.”