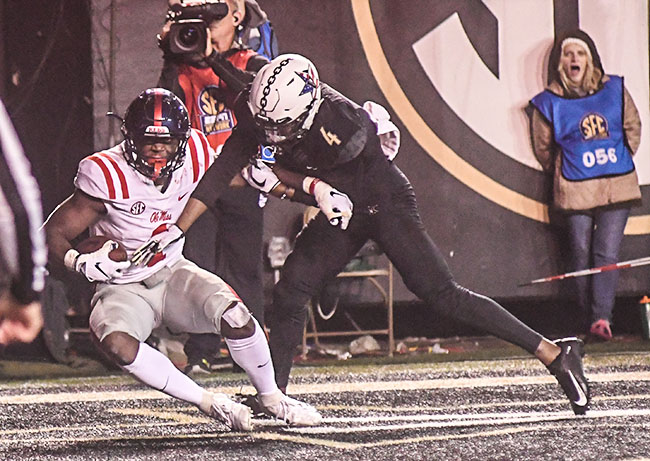 NASHVILLE — The list of heartbreaking ways Ole Miss has lost a football game this season can be increased by one.

A.J. Brown seemingly had a touchdown catch in the first overtime period and an extra point away from forcing a second one with Vanderbilt. Instead the ruling of a touchdown was overturned and Brown was ruled to not have had control of the ball after having two hands on it and his body hitting the ground.

On the next play — a 4th & six play from the 8-yard line — JoeJuan Williams broke up Jordan Ta’amu’s pass to DaMarkus Lodge and Vanderbilt escaped with a 36-29 win.

“I feel like I gained control of the ball, had two feet down, knee down. I just thought I had control,” Brown said of the catch. “How much more control do you need?”

Brown’s overturned catch and subsequent failure to score a touchdown was not the sole reason Ole Miss (5-6, 1-6 SEC) lost their fourth straight game. The season-long struggles of the offense trying to find touchdowns in the red zone found their way to Vanderbilt Stadium on Saturday. The Rebels had seven trips inside Vanderbilt’s 20-yard line and found points on six of those. The only issues was five of them resulted in field goals and only one produced seven points.

“That’s the story of the game in my mind,” Ole Miss head coach Matt Luke said. “Anyone of those field goals are touchdowns you win the football game. Again, I think the ball was going to the right (spots). We’ve just got to make the plays when they’re there and score touchdowns in the red zone. We had a lot of drops. A couple balls that were knocked away at the last second and a couple reviews.”

In the first quarter, replays overturned apparent touchdown catches from Lodge and Jason Pellerin on the same possession. Later on that drive the Rebels were unable to score a touchdown from the half-yard line and settled for one Luke Logan’s five field goals. Logan’s final field goal with 40 seconds remaining sent the game into overtime.

Ole Miss jumped out to a 13-0 lead after Brown hauled in an 84-yard touchdown catch to start the second quarter. It was one of two touchdown passes from Ta’amu on the night, Lodge had the second on a 9-yard catch in the fourth quarter to tie the game at 26-all at the time.

The Commodores (5-6, 2-5) managed to turn the tied with 19 unanswered points, a rally that spanned the second and third quarters.

Ta’amu finished with 457 yards and two interceptions to go with the two scores.

Isaiah Woullard, who replaced an injured Scottie Phillips, rushed for 107 yards on 16 carries. Brown had 9 catches for 212 yards and Lodge finished with 117 yards on 9 catches.

Luke said postgame Phillips, who sat out Saturday’s game with an ankle injury, will be day-to-day leading up to Thursday’s Egg Bowl match up with Mississippi State.

“A lot of kids in that locker room that are hurting right now,” Luke said. “You got to find a way to regroup. …They don’t have any choice. (Thursday) is a huge game and they got to get up off the mat, again. We’ve got four days left together and this team deserves to go out with a win.”