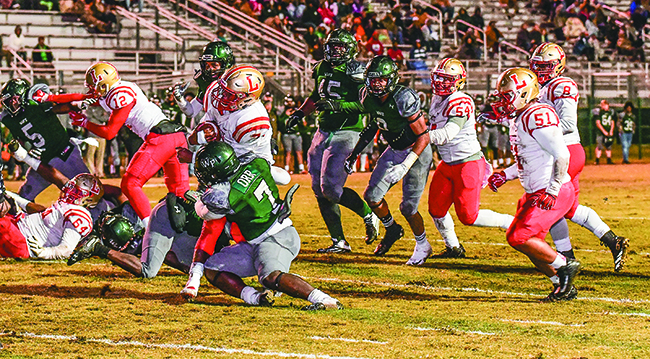 OXFORD — The sour taste of defeat is still fresh in the Lafayette locker room following their season-ending loss to West Point last week. The Commodores had returned to the playoffs after a year absence and found themselves a win away from playing for their second North Half title in three years.

The Green Wave’s second half surge was too much and the Commodores were unable to get revenge for their Sept. 21 loas at West Point.

“It was a great game and it was two great football teams,” Lafayette head coach Michael Fair said. “It was a tough environment down there and we had the lead at halftime. Just came up, like we have four times this year, a play short. Our kids battled to the very end and had a chance with the last play of the game to make a run at it.”

Lafayette’s 2018 campaign was a polar opposite to their 2017 season. A year ago the Commodores were sitting at home in November after a three-win season and a win short of clinching a playoff spot. This season they improved their win column total by six and were in the hunt for the No. 2 seed until the penultimate week of the regular season. The 9-4 mark is a mark of improvement for a program that had to overcome adversity a year ago.

“I just love where our program’s heading,” Fair said. “I love the strides that we made in (Class) 5A this year. It’s a different league and there’s no doubt about it. The competition week-in-and-week-out is really good and I think that maybe we’ve solidified a place in 5A as far as a team that folks are going to have to reckon with. We weren’t that team a year ago.”

The offense regained its identity this year, re-establishing the run game. The Commodores carried the ball 501 times for 4,260 yards in 13 games, averaging nearly a first down a carry (8.5 yards). With three players rushing for over 1,000 yards Randy Anderson (1,399), Jamie Shaw (1,239) and Lance Stewart (1,167) the Commodores returned to their roots.

Anderson also gave reason for there to be continued optimism on offense. The junior became comfortable in the pocket, throwing for 1,140 yards and 8 touchdowns.

“Randy made huge strides,” Fair said. “It just shows his growth and maturity. We feel real good for the future. We’ve got talent coming and we’ve got seniors that are going to be back next and going to be able to lead. …there are pieces here that I think we can kind of build around.”