Ole Miss coaches ‘excited’ about QB situation of the future 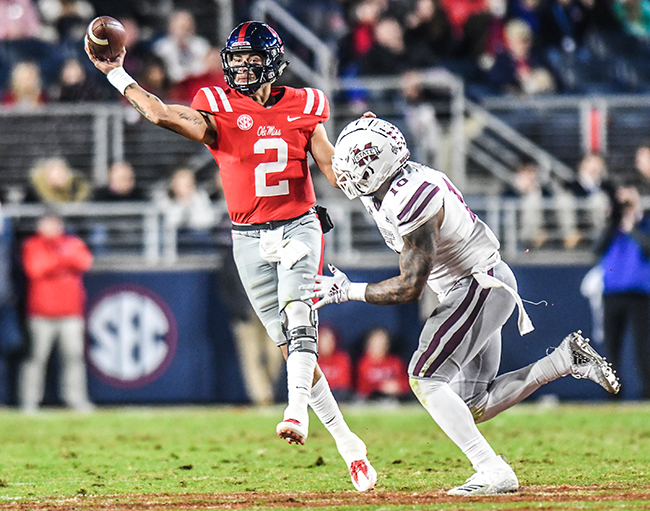 OXFORD – The Jordan Ta’amu era ended at Ole Miss Thursday against Mississippi State, but not in the ending he deserved.

At lot can be said about the senior from Pearl City, Hawaii, whose two years as a player were marred by bowl bans and an NCAA investigation, which took away from a rather remarkable season.

Ta’amu was 125 yards away from setting the single-season Ole Miss passing record, currently held by former Rebel quarterback Chad Kelly, but left the game after dislocating his finger in the first quarter and couldn’t stay in the game.

Enter Matt Corral, the freshman, who will benefit from the new NCAA rule regarding redshirts and keep his redshirt status.

Corral was virtually tossed into the fire against Mississippi State, and although the freshman’s stats didn’t jump off the stat sheet, his attitude stuck with his coaches.

“He didn’t look intimidated or scared,” head coach Matt Luke said. “He’s going to be the quarterback of the future, and we’re going to be really excited about him.”

Playing against one of the SEC’s top defenses, Corral completed 5 of his 8 passes for 65 yards and one interception. Corral had a 41-yard touchdown taken away because he didn’t get the snap off before the third quarter ended, but his interception, however, could almost easily have been a touchdown itself.

Corral launched a deep ball to receiver DeMarkus Lodge that traveled about 40 yards in the air and landed right between Lodge and defensive back Maurice Smitherman.

Had Smitherman not made an amazing play to snatch the ball away from Lodge when he was juggling the pass, it might have been a touchdown.

“He has the capacity, from an intellectual stand point, to be really, really good, really special.”

While a lot can be said about the quarterback of the future, probably not enough has been said about Ta’amu.

Coach Luke said he lauded his seniors for sticking though the last two seasons, which have been riddled with scandal and coaching changes. He said some players had the opportunity to leave, but did not. Luke did not specify if Ta’amu was one of those players.

Ta’amu, who came to Ole Miss from junior college in 2017, spurned five other offers from programs where he might have been able to play in a bowl games and stuck around when Ole Miss had another bowl ban imposed on the 2018 season.

“We obviously don’t enjoy losing a football game, but these players, these men, have been through an enormous amount the last two years,” Longo said. “It’s an honor for me to be around these guys, to watch them fight and persevere. Jordan is a spearhead of a lot of that.”

Ta’amu finished his Ole Miss career passing for 5,600 yards and 30 touchdowns in only 20 games. His successor, barring another quarterback bursting on the scene in the spring, will be Corral. And Ole Miss coaches are excited about the possibilities.

“It’s just a matter of time before Matt is where he wants to be, and where he needs to be, run this program,” Longo said.

“That’s what I think y’all will see here in the future.”

Water Valley returns to North Panola for 3A North…