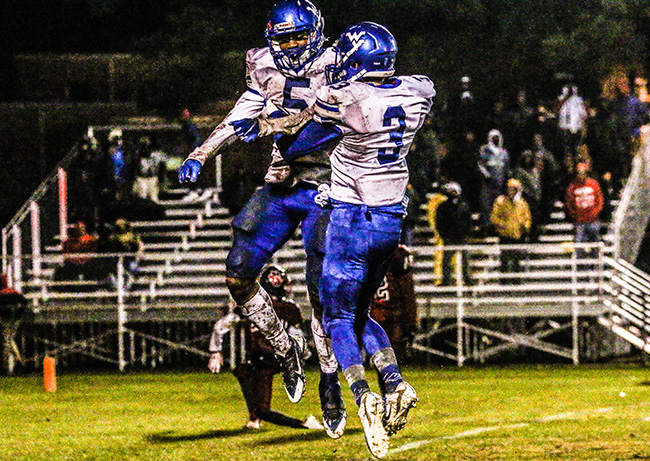 Water Valley vs. North Panola in the MHSAA Class 3A North Half Finals in Sardis, Miss. on Friday, November 23, 2018. (Keli Lindsey)

Patience and perseverance have paid off. This is the year the sign will be updated. The Blue Devils defeated region foe North Panola 43-28 for the Class 3A North Half championship last Friday. Next to 1996, 2018 will be painted. Though the Blue Devils are looking to update a different stat on the sign; their first state championship since 1990.

That opportunity will be at 11 a.m. on Friday at Southern Mississippi’s M.M. Roberts Stadium when the Blue Devils play Seminary for the MHSAA Class 3A state championship.

Water Valley’s journey to this point can be traced back to their 2-9 season in 2016. After the year concluded, coaches and players gathered in their fieldhouse and made a decision to never experience another season like the one they just went through.

Yes, they were a team full of freshmen and sophomores taking the field and earning their lumps every Friday night. But those excuses were never used beyond accepting the reality of their situation. 2017 saw a turnaround, reaching the second round of the playoffs last year before losing to eventual Class 3A runner-up Yazoo County. It was a step in the right direction, but head coach Brad Embry saw even more potential in his team.

In 2018 those freshman and sophomores were juniors and seniors with experience beyond most other upperclassman they faced. That is because most other teams did not have to go through the trial by fire the Blue Devils were forced into. The fruit of their labor and hard work paid off and the Blue Devils have marched to Hattiesburg with one of the more battled tested teams of the 12 who are vying for state championships this weekend.

Experience goes a long way, but a team does not reach these heights of success without a team full of players who are all pulling the rope in the same direction. With that comes times where unselfish acts are required. One example is Blayne Clark. The junior was the Blue Devils starting quarterback at the beginning of the season, sharing time with Jacob Truss in a two-quarterback system. As the year wore on Truss started earning more and more playing time and eventually overtaking Clark as the starting quarterback.

Clark never complained, bickered or turned his back on his team. In fact he did the opposite. Clark was willing to do whatever was asked of him for the team to find success so much that he was the first player off the sideline in Sardis last week to wipe off Truss’ hands, keeping them dry.

“That’s why we’re good. Because a kid like that who’s been a starting quarterback all year is cleaning Truss’ hands. Not a lot of kids would do that nowadays,” Embry said. “That’s important. That’s why we’re a good football team. He’s one of the guys who does everything right and leads these guys.”

The infectiousness of wanting to do what it takes to ensure success has spilled out of the field house and into the community. The entire town of Water Valley has embraced what has become a historic season for their football team. On the way out of town on a rainy Friday, the town threw a parade for the Blue Devils when the headed to Sardis last week.

The visitor’s stands were full of Blue Devils supporters last week in cold and rainy conditions. If that is the barometer of support the team has received, all of Water Valley may be closed for business this Friday. If you need to reach anyone from ‘The Valley’, you will find them in Hattiesburg.