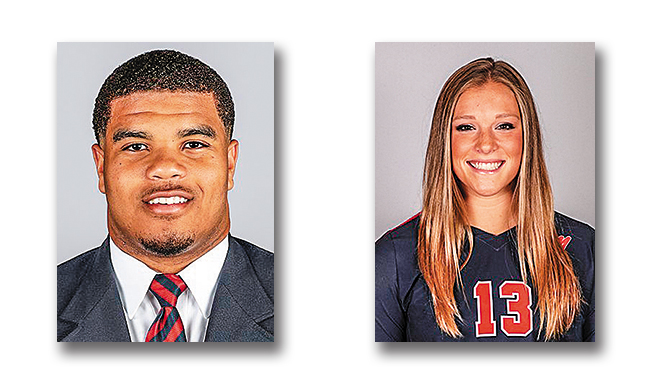 Two Ole Miss standouts were awarded Wednesday by the Southeastern Conference for not just their performance in athletics, but for what they do in their communities. Javon Patterson, a senior offensive lineman on the football team and Emily Stroup, a junior outside hitter on the volleyball team were named to their sport’s SEC All-Service Teams.

Emily Stroup was one of just 12 volleyball players honored with the award by the SEC. The North Dakota native, Stroup finished the season second nationally in kills (584). Three separate times this year, she broke the Ole Miss record for kills in a single game, in route to a season when she broke the season-long kills record. She also earned All-SEC recognition by coaches this weekend.

While Stroup also excels in the classroom – she is a three-time SEC Academic Honor Role selection – she is one of the most active Rebels in the community. Stroup volunteers at the Brookdale Assisted Living Center and with the Reading with the Rebels program. She is also one of the head volunteers for the volleyball section of the National Girls and Women in Sports Clinic, among others.

Away from the gridiron, Patterson is involved in a bevy of service events. In addition to volunteering with the Special Olympics and visiting patients in the Batson Children’s Hospital in Jackson, he helped start Patterson’s Footlocker. An effort to aid homeless shelters in Mississippi, Patterson’s Footlocker has collected over 6,000 pairs of socks to ship out to communities all over the state.