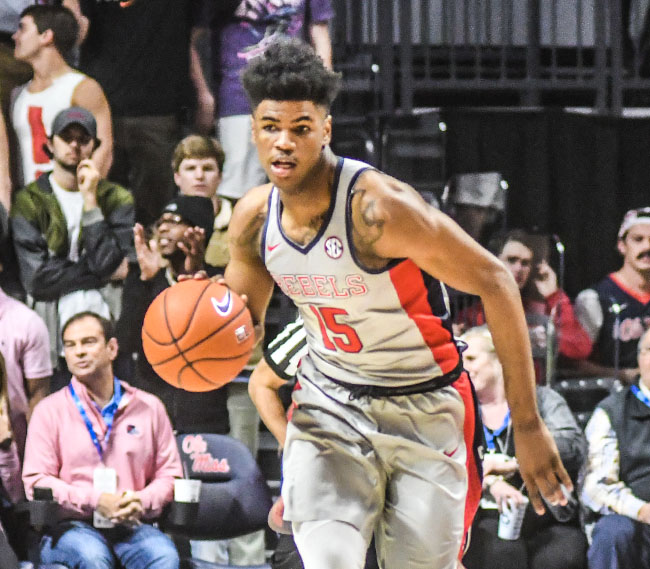 OXFORD – Wednesday’s 93-86 win over San Diego had its bright spots – the Rebel’s broke The Pavilion shooting record at 61.1-percent – but it highlighted some problem areas for Ole Miss. Freshman wing KJ Buffen had his best night as a Rebel, but the team needs others to step up off the bench if they are to compete come conference play.

Davis has tried different things lately to find that 8th reliable player. Junior forward Zach Naylor subbed in Wednesday earlier than he ever has. However, he played only five minutes total. KJ Buffen’s big night showed against San Diego he is capable of playing a heavier workload. Regardless, there’s still minutes to be had. Relying on six players to carry a bulk of the minutes is not sustainable, long-term.

“You’ve got Louis (Rodriguez), Zach (Naylor) and Scooter (Halums). We’re kind of just waiting for somebody to step up,” Davis said. “D.C. (Davis) has been good against the Nicholls and Western Michigan, but now can D.C. play against these Butler, Baylor and Cincinnati games? In the SEC that’s what you’re going to see every night.”

Rodriguez, Naylor, and Davis played Wednesday against San Diego, but they did not play effectively. In four minutes, the only box score item D.C. Davis recorded was a turnover. Rodriguez and Naylor were both 0-1 from the floor, and the Rebels were outscored by 10 points in Naylor’s five minutes of play.

All those negativities all come against San Diego. No offense to San Diego – they’re actually not bad, entering the game at 5-1 having beaten Colorado – but they’re not an SEC opponent. If you record a minus-10 against San Diego, how are you going to fair against Kentucky, Auburn or Tennessee? It’s not the best sign.

There will be a handful of times during SEC play where Ole Miss will play three games in a week. SEC tournament play is a game every day. It’s possible to play starters 33 minutes a game or more now, when they’re playing one or two games a week, but when the frequency of games picks up, competent bench players will become even more important.

The Rebels have six more non-conference games before SEC play starts. The goal over this December stretch has to be finding at least one more player from that bench list to play regular minutes, competently spelling the starters without being a complete liability.