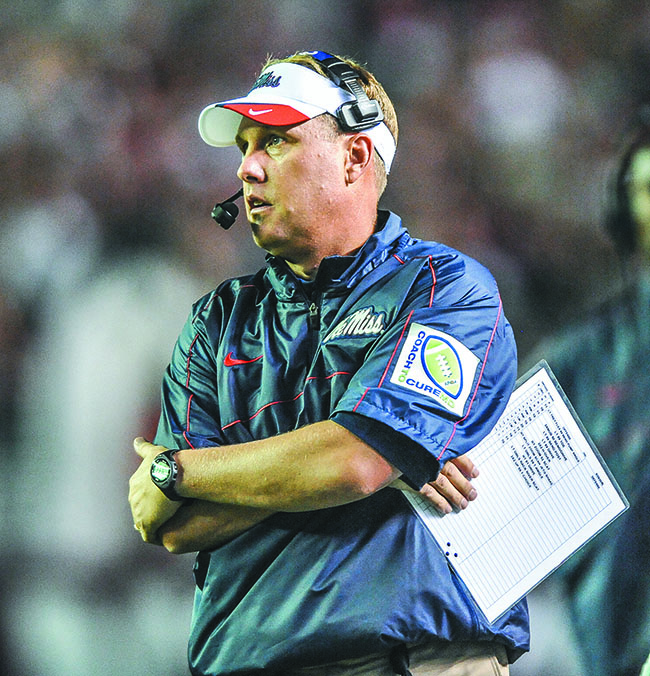 Former Ole Miss Coach Hugh Freeze, coaching against Alabama at Bryant-Denny Stadium in Tuscaloosa, Ala. on Saturday, September 29, 2012, has been hired by Liberty as its head coach. (Bruce Newman)

After a month of circulating rumors, former Ole Miss head coach Hugh Freeze has found another coaching job. Announced today, Liberty University, a private, Christian university in Virginia, has hired Freeze to be their head coach.

Hugh Freeze resigned from Ole Miss in the summer of 2017 during an NCAA investigation and something University of Mississippi brass referred to as a pattern of “moral turpitude.” It was later reported that the pattern referenced was that Freeze had called an escort service using his university-issued phone.

Freeze will take over for recently retired coach Turner Gill, who went 47-35 in the last five seasons at Liberty. During Gill’s tenure, Liberty made the transition from the FCS into the FBS. Like Notre Dame and BYU, Liberty is one of six FBS schools unaffiliated with a conference. They went 6-6 this season.

This is not Freeze’s first interactions with the Liberty University crowd. In a January convocation address at the school, Freeze and his wife Jill spoke about past transgressions that occurred when he was the head coach in Oxford.

Liberty hasn’t been shy about making splashy, yet potentially distasteful, hires of late. Liberty’s athletic director, Ian McCaw, was formerly the AD at Baylor, who was forced out amid the coming to light of a bevy of sexual assault cases that had been pushed under the rug.

Freeze had previously been linked, in rumors, to assistant jobs at Alabama and Auburn, as well as the open Tennessee offensive coordinator position. Freeze has reportedly signed a five-year deal with the school. Ole Miss and Liberty are scheduled to play in 2021.