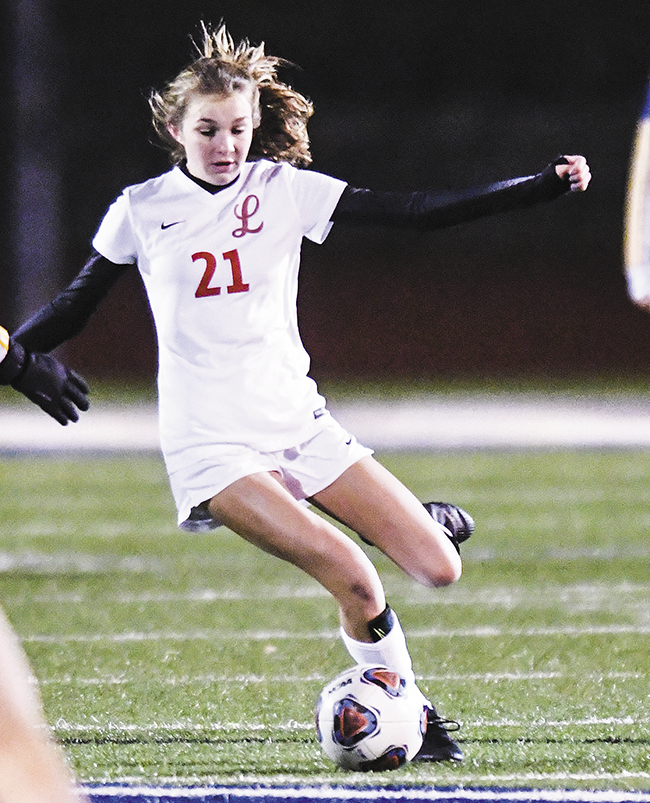 OXFORD — It has been three seasons since Lafayette competed for a state championship. After back-to-back trips to the state title game in 2015-16, and winning it in 2015, it has been a tough couple years since.

A first round exit in 2017 and a second round loss last season have followed up the runs to the title games, but this season brings optimism of winning the program’s second state championship.

Winners of 10 of their first 11 matches has the Lady Commodores off to a hot start that is mixed with a potent offense and a stifling defense.

“I think this team has done a really good job of gelling and all the work we’re putting in on the field, I think that’s helped,” Lafayette girls head coach Melinda Scruggs said. “I think our offseason helped us. We’re still pretty young. We got some young players that have really stepped up, but there is some really good leadership between my juniors and seniors.”

The Lady Commodores (10-1) were tasked with finding ways to replace production lost from a season ago. The EAGLE Player of the Year from last year, Halle Moore, graduated and took with her 13 goals. Lafayette also lost Emma Wilson and her five goals along with Jada Ross who was a key player in the Commodores’ defense last year.

With holes to fill on both sides of the ball, Scruggs has done a good job and managing ways to fill them. Another thing that has helped was getting their leading scorer from last season back. Lucy Wilson led Lafayette with 18 goals last year and the sophomore already has 9 goals through 11 games this season.

The scoring is evenly spread out behind Wilson. Sophomore Katelin Johnson and eighth-grader Julia Perkins each have 5 goals while seventh-grader Lillie Grace McCutchen and sophomore Emma Hays Roberts have both scored 4 goals. Five other Commodores have scored at least a goal

“We want to take it game-to-game and still have the ultimate goal at the end of this season, but of course we have to get there first,” Scruggs said. “Just trying to do the best we can to prepare every game.”

Through nearly the first half of the season Lafayette’s defense picked up where last year’s left off. During the 2017-18 season the Lady Commodores held opponents to 0.96 goals a game. In the first 11 games this season opponents have managed 10 goals (0.90 goals per game).

Only twice have opponents scored more than one goal on Lafayette. Center Hill scored 2 goals during their game on Nov. 10 at the Oxford Invitational at FNC Park and Oxford scored 3 goals in the Commodores’ first loss of the season on Tuesday.

“With our (full) backs we’ve tried some different things and I’m proud of the way that they’ve adjusted to the different ways we’ve asked them to work in the back together,” Scruggs said. “They’ve done a good job”

Lafayette returns to the field on Monday when host Strayhorn before beginning Region 2-5A play at Saltillo on Dec. 14.