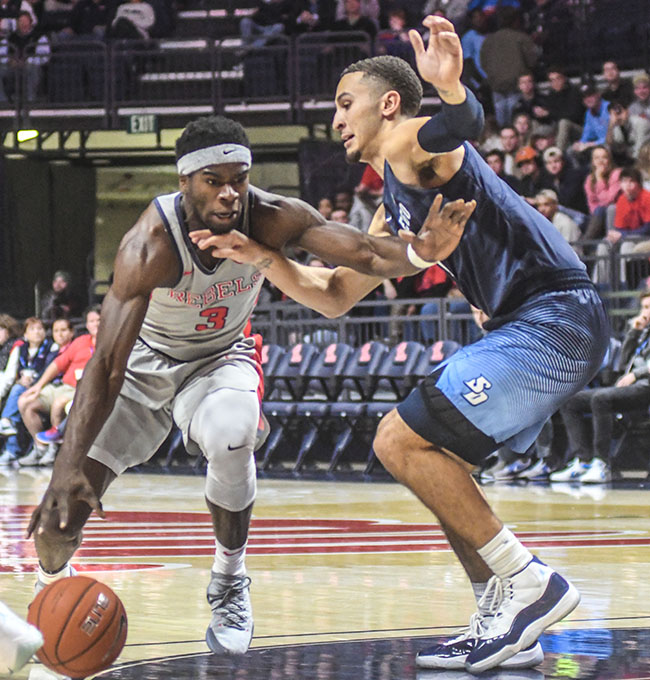 OXFORD – Last year’s Ole Miss basketball team struggled mightily on the road, compiling a 2-12 record away from The Pavilion. Things are looking up this season, having already gone 1-1 record in true road games, plus a handful of neutral site games, such as tonight in Jackson. Honestly, the Rebels are simply making more of an effort to put themselves in uncomfortable arenas away from Oxford.

“It’s all we talked about day one. All the toughness and things we’re doing is to try and win on the road,” said head coach Kermit Davis. “You don’t get a lot of opportunities (for true road games) before league play. Those opportunities are good, just to get the feeling.”

The game against Illinois State was only the Rebels’ second true road test. Tonight’s game in Jackson, as well as games in Florida against Cincinnati and Baylor count as neutral-site games.  The only other true road game was a November loss at Butler.

Many of the players that struggled last season away from Oxford play big roles on this year’s team. The backcourt duo of Terence Davis and Breein Tyree both started nearly every game for Ole Miss last season. Bruce Stevens and Devontae Shuler both start now and played 18-or-more minutes per game last season.

“We had bad games on the road last year. We couldn’t win on the road. But we have some guys that like playing road games,” said senior guard Terence Davis. “It’s a little more energetic. You go into someone else’s home and try to ruin it.”

A bit of the struggles this year on the road have been in the final five minutes of play. Against Illinois State, despite winning, they had six turnovers and a technical foul in that stretch. In the seven-point loss at Butler, Ole Miss held a five-point lead with 6:19 remaining.

Logistically, the team tries to keep everything the same on gameday, whether or not they are in Oxford. Shootaround times are the same and they eat at the same time. They’ll get to the arena at the same time before the game. The only difference is that, sometimes, they will go over to the arena and have a free shoot the night before.

“Every single thing stays the same,” Kermit Davis said. “It’s all the same. If you win, the guy who says the prayer pre-game will say the prayer the next day. The superstitions follow everything. All those things stay the same, especially if you have success. The players get in a ritual, coaches too, and you hope you’re comfortable with it.”

The lack of true road games before conference play begins is standard among power-five teams. Ole Miss will play only two. However, they’ve done a good job scheduling neutral-site games, such as tonight’s in Jackson and a Dec. 21 game against Middle Tennessee at Bridgestone Arena in Nashville. Five games away from Oxford should help this team improve when heated road environments in the SEC become commonplace.