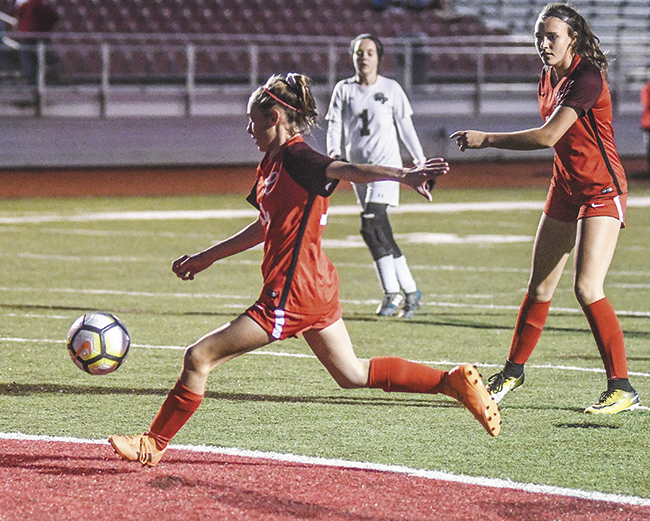 Since dropping their first game of the year on Dec. 4 at Oxford High School, the Commodores have won three straight matches. The cumulative score over that three-game stretch: 24-0. Games like the 13-0 blowout of West Point are exciting and fun on the scoreboard. But from a coaching perspective, it can be tough.

“It’s hard at times to learn things from games like this, but at the same time it’s good for us to continue to work on things,” said head coach Melinda Scruggs. “At halftime I said ‘hey, it’s 7-0, but how can we make changes? How can we fix things?’ It’s hard to do that, but it let’s make sure we’re still playing at our peak.”

Lafayette takes games like West Point as an opportunity to give all girls meaningful game experience on the pitch. Even a handful of middle schoolers are receiving significant playing time for the Commodores. Their second leading scorer, Julia Perkins, is an eighth grader.

The girls took the loss to Oxford earlier in the month hard. They lost 3-1 to the Chargers. In the 13 games not against Oxford, all wins, they surrendered just seven goals. However, moments like that are teaching moments for the Chargers. Winning is great, but you can learn more about yourselves in hard losses than you can in blowout victories.

“I told the girls after the Oxford game that I was excited they were upset. They’re not satisfied, and that’s the best part. They’re ready to come out and train harder the next day,” Scruggs said. “Sometimes losing a game is good, because it makes you go back to the drawing board to see how you’re going to fix it.”

This team is truly getting back to the dominance of former Lafayette girls soccer teams. After playing in back-to-back state titles in 2015 and 2016, they were outed in the first round two seasons ago and the second-round last season. Scruggs said this team is different, buying more into the fact that it takes eleven girls working together at all times to get back to their peaks.

“They’ve all bought into the fact that they want it together, and they’re willing to set themselves apart as a team,” Scruggs said. “For some reason, this group is really taking to heart that they’re going to do this together. And that includes everyone on the bench. They’re all bought in.”

At 13-1, the Lady Commodores are currently the no. 9 team in the state and the no. 1 team in 5A, according to MaxPreps. They play seven more games throughout January before the start of the playoffs. While Scruggs stresses for the team to take everything one match at a time, a Jan. 12 match against undefeated and no. 10 Lewisburg looms for the Commodores.