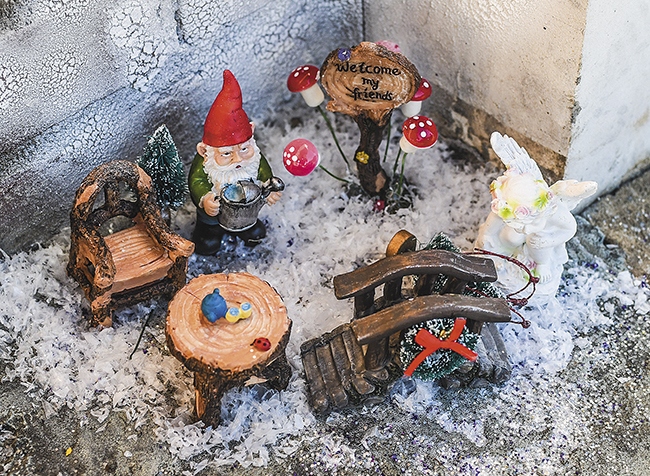 A Christmas themed display of elves is located outside Oxford Square North, on the Square in Oxford, Miss. on Tuesday, December 18, 2018. (Bruce Newman, Oxford Eagle)

OXFORD — The Square has a few new residents this Christmas season. Shoppers who are bustling from store to store in the final days may want to stop and look a little closer and some added decorations that have sprung up in recent days.

‘Gnome Homes’ as their creators have called them, are making the center of Oxford their home for the next several days. Angela Maloney and Deb Pittman along with their daughters, Bryars Pittman and Bria Maloney, decorated four unique spots around the Square with tiny gnomes and other accessories.

It was an idea they came up with after visiting another Mississippi town.

“We went to Greenwood last week and in Greenwood they have permanent little Christmas, cemented homes,” Maloney said. “They’d have them mounted in Greenwood around buildings. We saw it and we thought it was such a cute idea and we walked around to see if we could find another. We thought ‘let’s do that in Oxford.’”

From there Maloney and Pittman made a trip to Hobby Lobby to pick up gnomes, tables, chairs and snow from the craft section and combined it with other items they already had at home.

From there, the making of the ‘Homes’ commenced at Old Venice Pizza Co. last Friday where they used a large table as their home base for creating the decorations. Once one scene was crafted a location had to be picked out. They criteria was a place that would be out of the way from foot traffic but also an area where they could get the most exposure and seen by the town.

The four locations are City Grocery, Ya Ya’s Frozen Yogurt, Jane and near Uptown Coffee. Every scene is different at all four locations, giving the opportunity for families to go search for each all around the Square.

With this being the first year for the homes, Pittman and Maloney’s wish is to hopefully make it an annual tradition and possibly add new locations and expanding the scenes they did this year.