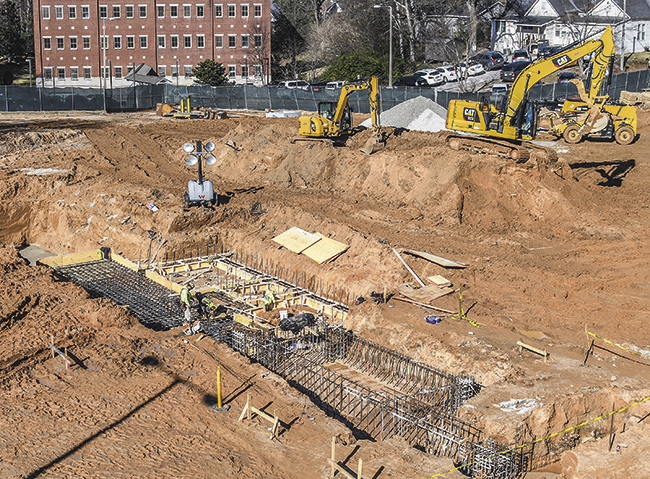 Construction on a parking garage in downtown Oxford has had a much later starting date than originally anticipated, and the project is now scheduled to finish in late September.

The Board of Aldermen passed four change orders regarding construction on the Oxford Parking Garage, which were needed to update the current contract with Shaw Services to reflect the new milestones.

According to plans on the Board of Aldermen’s agenda, the Oxford Parking Garage, which will be in the Oxford Square North parking lot, the date of Substantial Completion is noted as September 24, 2019.

“We’re asking to shift all those milestone dates so they are consistent with what our actual start date is,” Chief Operating Officer Bart Robinson said during the meeting.

Construction on the garage was originally slated to begin in early September 2018, but that was halted when Shaw was unable to secure a payment performance bond.

The parking lot was reopened for the first few Ole Miss football games of the season.

The parking garage project is also considered a year-long project, Robinson told the EAGLE in September 2018, meaning there’s a good chance the parking lot most likely won’t be open for the start of Ole Miss 2019 football season.

Board of Aldermen approve building codes, without sprinklers

After pushing back voting on updated fire and building codes due to a debate for sprinkler systems in townhomes, the Board of Aldermen finally made their decision.

Sprinkler systems will not be required in townhomes.

Aldermen Jason Bailey and Mark Huelse, who have both openly opposed requiring sprinklers in official and unofficial meetings, voiced their opinions one more time Tuesday.

Bailey explained his argument one last time to Alderman Preston Taylor, which was the current system, with the two-hour firewall and smoke detectors with battery backup were more than enough to keep families safe.

The proposed required sprinklers could cause $500,000 worth of damages if installed incorrectly.

“I feel like we have enough safety measures in place,” Bailey said.

The board unanimously approved the updated codes, with the exemption of residential townhomes having sprinklers.