Ole Miss basketball is fun again; and the numbers back it up 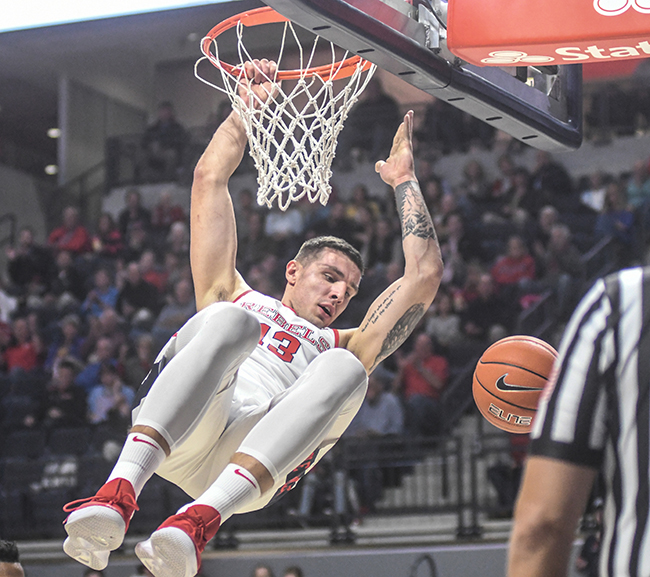 Mississippi's Dominik Olejniczak (13) dunks against Fayetteville State in a preseason game at The Pavilion at Ole Miss, in Oxford, Miss. on Friday, November 2, 2018. (Bruce Newman, Oxford Eagle via AP)

Exhibit A of a good team that is miserable to watch is Virginia. UVA has played itself into perennial powerhouse status the past decade but play a pressuring defensive brand of basketball and score around 60 points a game. Honestly, it’s not that fun to watch.

Ole Miss is different. There’s no one-and-done NBA talent or high-flying uber-athlete, but they play a brand of basketball that is so aesthetically pleasing. They’re not playing a pack-line defense and slowing the pace like UVA, they’re moving the ball and playing a man-zone hybrid defense that is reminiscent of… no one. It’s a uniquely Kermit Davis brand, and it’s fun. Ole Miss basketball is fun again.

The thing with fun is that it’s sometimes bad. Think Ben Simmons at LSU. Great talent, but simply underutilized and misunderstood. It’s entertaining, but they’re going to miss the tournament. This Ole Miss team may not be incredible, but they’re not bad. And the numbers back it up.

Through the non-conference slate thus far, Ole Miss ranks 58 in the nation in Kenpom. Broadly speaking, Kenpom is the most widely accepted advanced ranking system in college basketball. It breaks each team down into possession by possession efficiency. Now ranking 58th may not sound great until you consider the fact that it ranks all 353 division one basketball teams. 58 sounds better now? Thought so.

Offensively, Ole Miss ranks as the 27th best offense in the country. Watching the team, this all checks out. The way they swing the ball creates open looks like few other teams, there’s no isolation play with the Rebels, everything happens within the flow of the offense. Defensively, to no surprise, the Rebels aren’t as good. On a possession-by-possession basis, the rank 117th nationally.

Individually, there are some standouts for Ole Miss. While Terence Davis was the preseason All-SEC nod from Ole Miss, junior guard Breein Tyree has been their best player thus far. To date, Tyree ranks 143 nationally in value added via points per game. Yet again, 143 sounds not all that special. But take those 353 teams Kenpom ranks and multiply it by a 12-man scholarship team. That gives you over 4000 players. Tyree is having a special season.

A new rating system in college basketball this year is the NET Ratings. It’s classified by the NCAA as a system that takes into account “game results, strength of schedule, game location, scoring margin, net offensive and defensive efficiency and the quality of wins and losses.” NET rating was supposed to eliminate a prior algorithm to rank teams that was constantly mocked called RPI. Ole Miss Ranks 49 in NET rating and 42 by the old RPI.

No rating loves the Rebel strength of schedule. Kermit Davis didn’t have a ton of time to take control of Ole Miss’ scheduling this season, something he’ll being to do moving forward. However, Ole Miss seems to have played some good teams.

Butler on the road is a loss, but a good opponent on their home court. They’ve beaten Baylor and also lost to Cincinnati. All three are likely tournament teams, but none of them are currently ranked. A big issue with the Rebel strength of schedule is the number of neutral site games. Their only true road tests of the year are games at Butler and at Illinois State.

Ultimately, Ole Miss seems to get better with each week leading up to SEC play. The Kermit Davis brand of basketball is not only aesthetic pleasing, but it works. The Rebels are winning games, and looking good doing it.